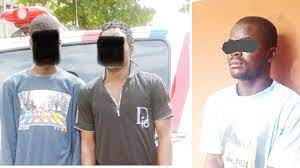 Residents of Agbotikuyo in the Agege Local Government Area of Lagos State have called for help from the state government and security agencies over incessant attacks by a cult identified as Awawa Boys.

According to residents, passersby and commuters are not spared by the hoodlums who break into rooms and shops where they dispossess people of their valuables.

A landlady in the community, who identified herself as Mama Samuel, said the cult members intensified attacks on residents in May 2022.

She said, “After the Ramadan fast, they started robbing from house to house. They number over 200 and they use weapons such as cutlasses, guns and charms.

“They even destroy shops and break into them to steal things. The only thing that saves some of us is our burglary-proof bars because if your house doesn’t have iron doors, they will surely rob you. But glass windows, they break at will while shouting that we should open the doors or they will break them down and kill us.

“They went to my neighbour’s house, shot the door open, entered and took all their phones after beating them up.

“They ransacked another lady’s wardrobe, took all her business money and beat her to a coma.”

Another landlord, Tajudeen Ambali, 83, said, “Those boys tried to enter my house but for my iron door. They, however, entered the next compound.

“They come every three days apart and when they destroy your window and you repair it, when they come three days later, they’ll destroy it again.

“They come between 8pm and 12am. We are begging the government to come to our aid.”

A retired police officer, Pa Rufus Akindade, 88, said he was attacked in his house.

He said, “They came, broke into my compound, but not into my apartment because of the iron doors. But I am afraid; if they come back like they said they would this evening, I may be killed.”

The residents, while calling for the deployment of the military to end the menace of the hoodlums, also urged the National Drug Law Enforcement Agency to visit Oke Ayo Street, Agbotikuyo, where the suspects allegedly smoked marijuana and other illegal substances.

Meanwhile, the Lagos State Police Command said it arrested 12 suspects in connection to a series of cultist-related clashes in the area.

A statement by the state Police Public Relations Officer, SP Benjamin Hundeyin, stated that the operation, which spanned two weeks, was led by the Commander of the Rapid Response Squad, CSP Olayinka Egbeyemi, adding that the suspects nabbed with hard drugs were handed over to the NDLEA.

Hundeyin said, “Officers of the Rapid Response Squad have arrested two leaders of rival cult gangs and 10 others over the incessant cult and gang wars plaguing Agege and its environs. The arrest of the 14 suspects is part of series of efforts by the Lagos State Police Command to improve the security situation in Agege and the state at large.

“The arrest of the two rival gang leaders, Adagun and Yaba, along with their gang members, followed sustained and diligent intelligence gathering within Agege communities.

“Recovered from Adagun are a rifle butt, a police vest, a pepper spray, a knife, a machete, hard drugs, among others.

“Furthermore, two other suspects, Monday Okezie, 36, and Oluwasegun Oladipupo, 32, notorious for supplying hard drugs to the gangs were arrested with large quantities of codeine, tramadol and rohypnol, and have been handed over to the National Drug Law Enforcement Agency.”

Hundeyin stated that other suspects had been transferred to the State Criminal Investigation Department for further investigation and prosecution.