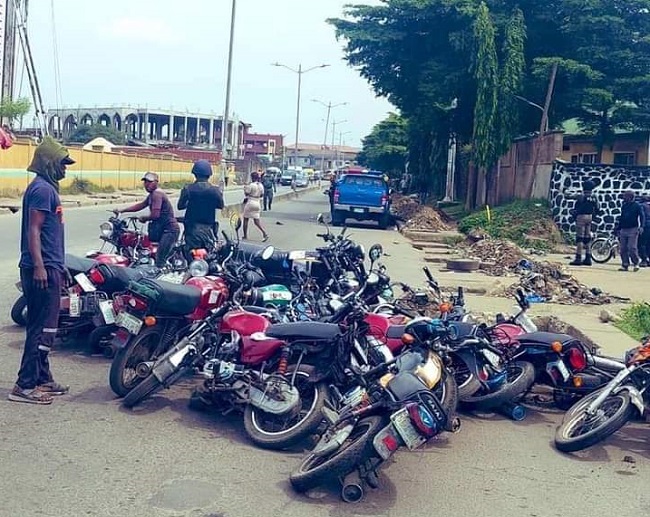 Pandemonium broke out in Idi-Araba, in the Surulere area of Lagos State on Tuesday when commercial motorcycle riders, aka okada riders, clashed with men of the Lagos State Environmental Sanitation and Special Offences (Enforcement) Unit, aka task force.

The task force officials stormed the community around 10am to enforce the ban on okada riders, which affected the area.

However, the riders were said to have resisted, which led to a confrontation between them and the officers.

A video clip seen by one of our correspondents on Twitter revealed the moment the riders went on the rampage, making bonfires on the road.

The video, posted by @eonsintelligenc, showed some of the riders protesting on the road.

The man behind the camera, while speaking in Yoruba, said, “There is no road; even vehicles dare not come here. The police have started a war in Idi Araba; they said no more motorcycles. They have packed all the motorcycles from Idi Araba. If they come here, they will collect.”

Some commuters, who also took to social media to share their experiences, lamented being stranded due to the riot, as they claimed gunshots were fired.

Videos of tear gas being fired at the riders.

A resident, Jinadu Moshood, told one of our correspondents that the raided community was under Mushin Local Government Area.

He said, “What I don’t understand is why the police went to arrest okada riders in Idi-Araba because that part of Idi-Araba is under Mushin LGA and the ban does not affect there. This was an illegal operation by the police and as I saw their vans and trucks, I knew this would happen.”

Another resident, Adeshola Oluyemi, said, “I heard gunshots being fired by the police, but I could not see those shooting at the police. I saw the police shooting tear gas, and firing gunshots into the air to scare them.”

The Lagos State Police Public Relations Officer, SP Benjamin Hundeyin, told PUNCH Metro that there were no casualties in the incident.

He said, “No life was lost at Mushin during the fracas today (Tuesday) and no building was burnt down. They can’t fight because the task force went well prepared. They were just causing a scene after the task force left with some of their impounded motorcycles and men from the area command have since been drafted there.”

He said, “We started the enforcement around 10 am while the resistance started around 11am. We were there to enforce the governor’s ban on okada, which affects six LGAs. Idi Araba falls under Surulere LGA, which was why we went there.

“The resistance from the okada riders is not something new. Enforcement anywhere in the world is not a tea party and it is not people-friendly especially with the people involved, in this case, the okada riders. Normalcy has been restored to the area.

“We were able to do our job without any problem. Over 180 motorcycles from that axis were impounded.”

He said, “First and foremost, security operatives must be attentive. They should adopt diplomacy. They will muddle up things if they don’t operate on that ground.

“If you run into defaulters, that does not call for exchange of gunfire. The operatives should be professional. Meanwhile, if Okada operators have firearms, then they are criminals.”