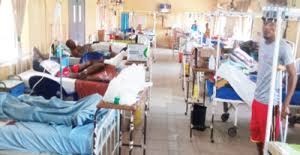 Following the attack on Saint Francis Catholic Church, Owo, headquarters of Owo Local Government Area of Ondo State during last Sunday service, survivors of the deadly attack are recounting their stories of the incident. 24 hours after the horrific attack, the town is still in pensive mood with roads deserted and shops under lock and key, with the town’s socio-economic activities partially grounded.

Accessing the town from Emure junction down to the post office area and up to Ijebu- Owo axis, residents were seen in clusters discussing the unfortunate incident.

At the Federal Medical Centre (FMC), Owo, families of the injured victims were still thronging the emergency unit of the medical facility to ascertain the level of recuperation of their loved ones. However, there has been palpable fear not only in Owo town, but across the state that there might be reprisal attack over the incident.

According to findings, the incident had heightened tensions in the state, particularly in the northern senatorial districts where the bandits’ attack had been on the increase lately. The victims with varying degrees of gunshot wounds, wore gloomy faces on their hospital beds at the Federal Medical Centre (FMC), Owo, as they battle for survival.

Narrating how he was able to survive the attack, Benjamin Ozulumba, 49, who lost his mother in the incident said the gunmen launched the attack when the priest had just closed the mass. While revealing that his wife and children escaped unscratched, Ozulumba, a Timber merchant, said “When we were about to close, we just heard sound of gun within the compound of the church. Before we knew it, they started shooting everybody and they threw dynamite.

“It was when the shooting was going on that I was shot in the leg. I lost my mother in the attack, but the rest of my family are safe. My mother is over 70 years old. “With blood already gushing out of my leg, I immediately summoned strength within me to move to the back of the catechist when there was explosion. On getting to the backyard, I saw a ladder and I escaped through the ladder. “When I was trying to escape I saw many bodies on the ground.

The bodies were just too many. I went to the church with my wife, children and my mother. But nothing happened to my wife and children.” Another survivor, Margret Attah, 43, a nurse with the Ondo State Specialist Hospital who had her two legs am putated due to the effect of the improvised explosives used by the gunmen said her live is already shattered.

Attah, a mother of four while writhing in pains on the hospital bed stated that she was yet to comprehend all that happened on Sunday. For Gloria John, 28, she said, “After the priest had given us the final blessings, we heard gunshots outside. The gunmen started shooting at us from outside. We started shouting and cried. We also began to call on God to save us. Over 100 people died including children. Even husband and wife died at the same spot “I went to the church alone.

My husband did not follow me. I was shot on the leg. It was when they left that my husband rushed inside the church and brought me outside. I and other victims were rushed to FMC.” Also, Alex Michael stated that he was shot by the gunmen while trying to protect his children under the pew during the attack. “In the church after the last prayer, we heard gunshot outside and before we knew it they had started shooting people and everybody inside the church and many people died. “I was with my kids and I tried to defend them and we have to move under the pew when the shooting was going on, but the place could not contain us and my legs were outside and they shot my legs, but thank God nothing happened to my kids.”

According to John Nwogwu, another survivor, the gunmen who were four in number were decked in khaki attire, adding that they began shooting from outside the church before making their way into the church. “What happened was that we were in the church after the last blessing and prayer by the Father. We just heard gunshot at the entrance of the church and before we knew it, they have started shooting and killing people. “Before we knew what was going on we have been surrounded and we had to hide at the back of the altar.

We heard a loud explosion and the ceiling fell on us. “Even at that they were still shooting at us and at the door of the place we were hiding, I saw one of our choir master, he was hit by the bullet on his hip, but I was too tired. I can’t even say about his condition because he was so weak when we left the church. “Where I was hiding I was able to see one of the attackers, he was putting on Khaki that look like that of man o’ war. He burnt the altar in the attacks. We lost husbands, wives and children. God was the one who kept us alive.”

Meanwhile, the Medical Director, FMC, Owo, Dr Ahmed Adeagbo has disclosed that the Federal Ministry of Health directed that the victims should be treated for free. While commending the efforts of some Nigerians who trooped to the medical facilities to donate blood to the victims, Adeagbo said supports the medical facility has been receiving have been massive. “For the other victims, we mobilised our staff and we worked very hard to make sure that we didn’t lose any of the people that they brought in alive.

Those that require surgery were operated upon and they are doing well. “The directive from the Federal Ministry of Health is that we should not collect money from the victims. We also have collaboration with the state government. They were able to mobilise 20 units of blood and they still promise to do more.

They were able to bring some consumables and they also promised to give more. “NEMA was also here this morning and we have given them what we need, but we are still expecting them. People have also been donating voluntarily. Many of the victims require blood.

“People are donating blood and those that require transfusion were transfused and I’m sure we will still have some in our blood bank now. Even UNIMED contacted us, we have ordered for them to give us blood.”

He added that “With the situation of things in the country, it is not easy to sustain the running of the facility. To provide electricity alone for 24 hours is a lot and it is a social service. “Even before this happened, many people could not even afford their treatment and Federal Government said people should not die because we cannot afford it, so what do we do?

There are a lot of problems along that line, because we owe the suppliers and we must pay them.”