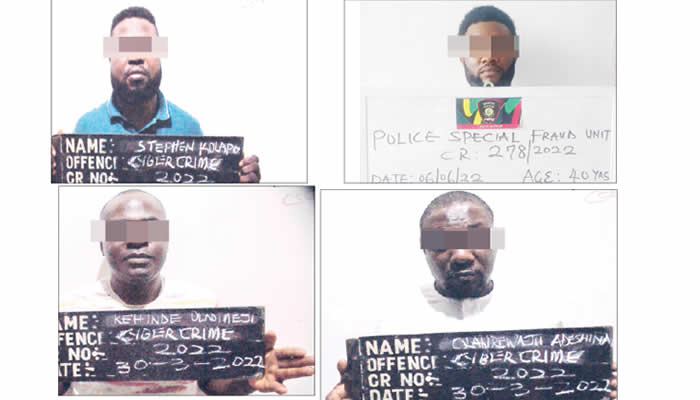 The Police Special Fraud Unit in Lagos State on Wednesday said it arrested three suspects for allegedly attempting cyberattacks on 10 banks in the state.

The spokesperson for the unit, SP Eyitayo Johnson, in a statement, said the Commissioner of Police, PSFU, Nneka Anyasinti, while acting on intelligence received from a leading new generation bank, on March 30, 2022, arrested the suspects.

Johnson said the suspects were in the final stages of recruiting a worker from the information and technology department of one of the banks in order to perfect the hacking of the banks’ network/posting application with the intent to pull out huge sums of money.

He noted that the suspects were arrested with incriminating exhibits during a meeting held with the bank worker they attempted to recruit, adding that the fourth suspect, Chibuzor Holland, who flew into the country from France specifically for the operation, escaped.

“The worker was asked to leave critical gateways open on the bank’s server for the syndicate to gain unauthorised access into the network and move money out using Python application and Zoom. After the arrests, forensic analysis of phones and electronic devices found in their possession disclosed a list of 10 other banks already earmarked to be hacked using a similar method once the first attack is successful.

“Operatives also discovered personal and corporate bank account details in the possession of the syndicate which they ought not to have. The case, charge no. FHC/L/238C/2022, is currently being prosecuted before Honourable Justice P.O. Lifu of the Federal High Court, Lagos Judicial Division, while effort is in top gear to apprehend Chibuzor Holland.”

In a related development, the police unit confirmed the arrest of the Managing Director of Beedel Strategic Investment Co. Nigeria Limited, Moses Odeleye, over a fraud of N816m.

The PSFU spokesperson, Johnson, said discrete investigation by the unit’s operatives led to Odeleye’s arrest on May 24, 2022.

He noted that Odeleye was arrested in connection with the forgery of 11 local purchase orders of five multinational companies operating in Nigeria and one agency of the Federal Government.

Johnson stated that the suspect (Odeleye) paraded himself on social media as a successful contractor with interest in civil engineering, construction, real estate and supply, and importation of heavy engineering equipment.

He said, “Beedel (Odeleye), as the suspect is popularly known, operates in connivance with former and current procurement staff of the companies whose LPOs were used to perpetrate the fraud.

“He forged the LPOs of these companies/government agencies and approached numerous banks and investment companies with proposals to finance the LPOs, which he cleverly tenured to be paid between 30 and 60 days so as to make the LPO financing appear juicy.

“The suspect, using this modus operandi, was able to fraudulently obtain the sum of N816m from two finance companies and diverted same to fund extravagant lifestyles, which includes building a mansion, office complex and purchase of exotic automobiles.

“Investigation revealed that for over eight years, Beedel mastered the art of using cloned LPOs to consecutively secure huge sums via LPO financing from different banks/finance companies, while using monies from one bank/finance company to settle his commitments to another bank/finance company, to maintain the fraudulent cycle of robbing Peter to pay Paul.

Meanwhile, Johnson said on April 15, 2022, the police unit was alerted to the risk and possible hack of the server of a non-interest financial institution located in Lagos State.

He said investigation by operatives attached to the Banking and Informal Financial Fraud Section of the PSFU revealed that between 3.45am and 4.55am on March 9, 2022, there was unauthorised modification of the profile of certain key staffers of the bank, which was done remotely.

“Investigation is ongoing to identify the persons responsible for the hack, while some of the staff initially alleged, have been exonerated,” he added.