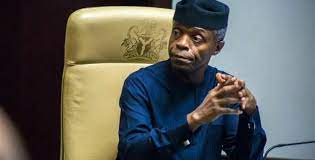 The White Witches Association of Nigeria (WWAN) on 29th of May, 2022 cautioned Vice-President Yemi Osinbajo against running for the Presidency in 2023.

This was made known by Dr Iboi Oshiomhole, the spokesman of the witches and the former board member of the Edo State Traditional Council during the administration of former Governor Adams Oshiomhole.

According to WWAN, God did not program Osinbajo to become Nigeria’s President in 2023; hence he would not win if he decided to contest.

Okhue also revealed that Osinbajo would conclude the mission God sent him on May 29, 2023.

He implored the Vice President to return to the pulpit where God has a higher assignment for him than being the “Head of State.”

“God sent him to deliver a message to Nigerians. He has done that and he should go back to the church. God will use him in a bigger way other than being a head of state,” Okhue told the Independent.

It  had earlier reported that Nigeria’s Vice President, Yemi Osinbajo, has publicly stated his intention to run for President in 2023.

It  also reported that presidential aspirant and former Lagos State Governor, Bola Tinubu has been declared the winner of the All Progressives Congress, APC, primary elections.