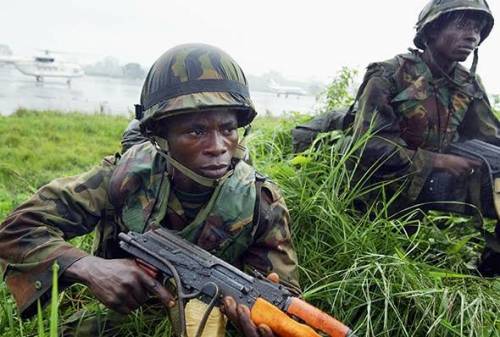 A Nigerian soldier has revealed that a mutiny against top officers in the military is in the offing if the authorities fail to address the burning issues affecting the welfare of troops.

The soldier said this in an outburst of anger in an interview with SaharaReporters.
The soldier who is attached to the 23 Brigade, Gibson Jalo Cantonment Yola, Adamawa State, said the poor treatment meted out to soldiers might soon snowball into a crisis, possibly with the violent breakdown of law and order as its consequences.

Speaking to SaharaReporters on condition of anonymity, the soldier urged President Muhammadu Buhari to thoroughly investigate happenings in the military, particularly issues involving and affecting the rank and file.

He said soldiers are forced to pay N42,000 each for the military kit they wear, describing it as unacceptable. He also lamented the poor residential accommodation given to soldiers.

He said, “I joined the Nigeria Army in 2013 and since then I have been given a military kit only once. I buy everything I wear as a soldier sent to the frontline to battle against terrorists.

“Besides, go to our barracks and see for yourself, everywhere is dilapidated, looking like facilities for rearing goats.

“Worse still, no reasonable benefits get to families of our fallen heroes and colleagues; things can’t continue this way, please.”

“Let me warn that things will not continue this way for too long, we’re human beings; we can react, we can revolt and I fear when it happens, it would be bloody,” he added.