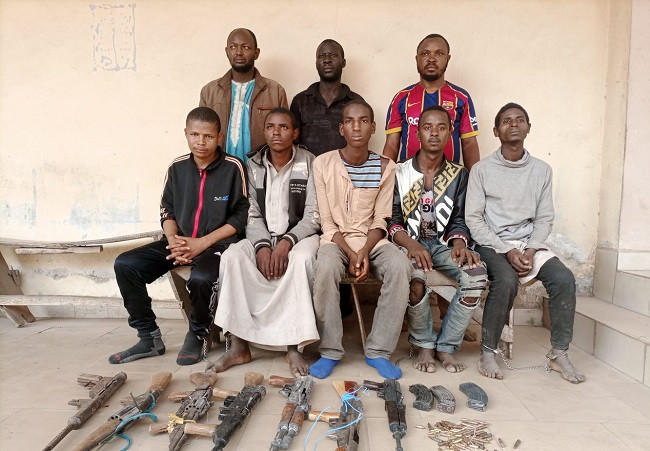 The suspects were arrested by the operatives of the Inspector General of Police, Intelligence Response Team (IRT) led by Olatunji Disu, a Deputy Commissioner of Police in different string operations in the different states, Nigerian Tribune reported on Friday, June 10.

According to leader of the gang, Iliyasu Saidu (a.k.a. Yellow), they abducted three female students of the Plateau State University, Bokkos, last year, raped two of them and killed the third one for resisting them.

Iliyasu Saidu (a.k.a. Yellow) confessed to have participated in several armed robberies, cattle rustling and kidnappings.

“I am a secondary school dropout. I stopped going to school because there was no one to pay my school fees. I have been arrested by police before for criminal conspiracy, armed robbery, cattle rustling and kidnapping. The case was charged to court, and I was in the prison yard for 3 weeks,” he said.

“My parents and one lawyer came to the prison yard and secured my release that time. I continued doing criminal activities with my gang members when I came out of prison. My gang members are: Ahmadu Kurma, Abdullahi Abubakar a.k.a. Abdul Lawyer, Badamosi Ardo Yakubu, Abubakar Mohammed a.k.a. Buba, Sky, Zaki, Douglas, Isah Umar and Sabi Audi.”

The suspect also continued “I have also facilitated the release of Buba before as a surety at Bokkos Police Station. On the 10th of June 2021, operatives of the IRT in Kateri Annex came to Bokkos LGA to arrest me in connection with one case of criminal conspiracy, armed robbery and kidnapping of three female students of Plateau State University, Bokkos.

Yellow admitted, “I am a notorious gang leader of kidnappers in our community and I have participated in several armed robberies, cattle rustling and kidnappings. The first criminal operation I did was kidnapping. We kidnapped one woman at Mangar village. We took her to Bodel Forest, and the victim spent three days in captivity. We collected a ransom of N800,000 before releasing her. The person that gave us the work is one Blessing Simon of Bokkos. I got N100,000 as my own share, while we gave the person who masterminded the kidnap N200,000. The people who participated in this operation were Badamosi, Ahmadu, Buba, Sabi, Mubarak Hassani and me.”

“In the second operation, we kidnapped one woman at Tadai village in Manguna District of Bokkos LGA. We took her to Tadai Forest, and she spent two days and collected a ransom of N300,000 before releasing her. I got a share of N70,000.”

He also confessed, “In the third operation, we kidnapped one man at Bokkos and took him to Bodel Forest. He spent 3 days before we got a ransom of N350,000 and released her. I got an N70,000 share. Those who participated in this operation were: Abdullahi Abubakar a.k.a. Abdul Lawyer, Sky, Zaki, Douglas a.k.a. Doggy Bokkos, Badamosi and me.”

He further revealed, “In the fourth operation, we stormed the Plateau State University, Bokkos, together with Ahmadu, Buba, Badamosi, Abdulahi, Abdul Lawyer, Sabi and Mubarak. We abducted three female students.”

The suspect also added that “We wanted to sleep with them. Two of them agreed and the third one did not. We killed the third one. Before we released the other two, we threatened them that we would come back and kill them if they reveal what happened to anyone.

Another member of the gang, 23-year-old Abdullai Abubakar aka Lawyer also confessed to having participated in various criminal operations in different states in the northern parts of Nigeria, especially in Plateau.

“There is one Igbo man, Ik in Daffo village, Bokkos. He sold two AK47 riffles and 60 rounds of live ammunition to Badamosi Ardo Yakubu and Yakubu Saidu’s elder brother, Iluiya Saidu (a.k.a. Yellow).

The suspect confessed that “We kidnapped one Challa in Bokkos. This work was given to us by Yakubu Joshua. We took the victim to Mangar Forest where he spent one day and a ransom of N700,000 was collected before he was released. I got N75,000 as my own share.”

“The second operation, we stormed the State University Bokkos. We kidnapped three female students and took them to Mangar Forest. We demanded N300,000 ransom, in which I got N50,000 as my own share. The victims spent one day with us. Those who participated in the kidnapping are Abdullahi Abubakar (a.k.a. Abdul-Lawyer), Annas Ilya, Iliyasu Saidu (a.k.a. Yellow), Badamasi Ardo Yakubu, Sky Bokkos and Zaki Bokko.

Force Public Relations Officer, Muyiwa Adejobi, who confirmed the arrest on Friday, commended the operatives of the IRT for working in consonance with the vision and plan of the IGP, Usman Baba Alkali to make all parts of Nigeria safe for all citizens.