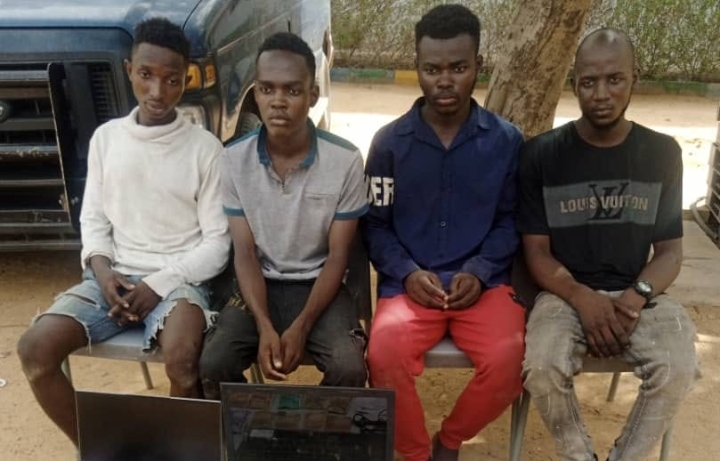 Four suspected armed robbers have been arrested by operatives of the Kano State Police Command.

He said the suspects were arrested while robbing the residence of an Indian national at Sharada Quarters.

The PPRO disclosed that one of the suspects used to work at the residence of the Indian national. He stated:

“On the 03/06/2022 at about 2000hrs, a team of Operation Puff Adder, led by SP Abdulrahim Adamu, Divisional Police Officer (DPO), Sharada Division Kano while on intelligence-led surveillance patrol at Sharada Quarters, Kano Municipal LGA, intercepted a Tricycle conveying one passenger parked in front of the residence of an Indian National suspiciously.”

“On sighting the presence of the Police, the tricycle rider Alhaji Musa, ‘m’, 45 years old, of Tudun Rubudi Quarters Kano attempted to escape, but the team shot at the tyre of the Tricycle. The rider and one Onyekachi Jude, ‘m’, 19 years old, of Rinji Quarters Kano, were subsequently arrested.

On preliminary investigation, four suspects confessed that Moses having stayed at the residence before, conspired with three others and went to the residence of the Indian national on several occasions, but the police presence frustrates their efforts.

“However, they were trapped and arrested on their fifth attempt, with one suspect escaping with a robbed Mobile Phone, a sum of Fifty Thousand Naira (N50, 000:00), and a Hundred dollars