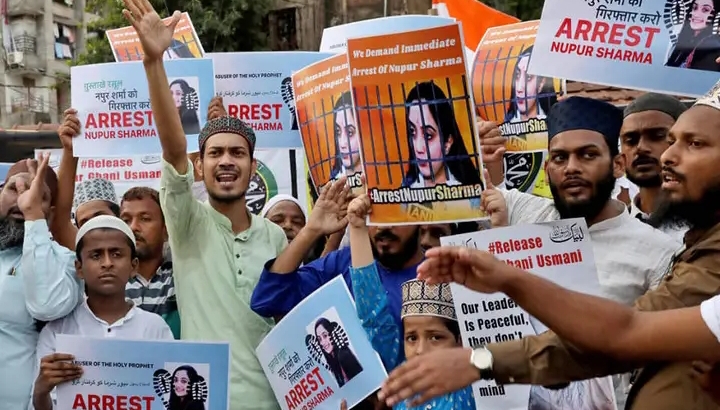 Indian police shot dead two demonstrators and arrested more than 130 on Friday during street protests around the country sparked by a ruling party official’s remarks about the Islamic Prophet Muhammad, an officer said.

Muslims took to the streets after Friday prayers in huge numbers across India and neighbouring countries to condemn the remarks, with police firing on a crowd in the eastern city of Ranchi.

Police officer from the eastern city of Ranchi said;

“Police were forced to open fire to disperse protesters and bullets hit some of them, resulting in the death of two.”

Earlier, police confronted stone-throwing crowds in at least two Indian cities on Friday as crowds protested in many areas of the country over derogatory remarks about the Prophet Muhammad made by two former members of the ruling party.

Prime Minister Narendra Modi’s government has faced a backlash from Muslims at home and abroad, including from a number of Gulf countries, after two officials from his Bharatiya Janata Party (BJP) commented in late May and earlier this month on the prophet’s private life.

One of them, spokeswoman Nupur Sharma, has been suspended and the other official has been expelled by the party.

That has not calmed anger in the latest instance of what some in the minority Muslim community see as increased pressure under the rule of the Hindu nationalist BJP on issues ranging from freedom of worship to the wearing of hijab head scarves.

In the Uttar Pradesh city of Prayagraj, riot police with shields charged and fired tear gas at crowds on Friday in a street strewn with broken bricks and stones, video footage from Reuters partner ANI showed.