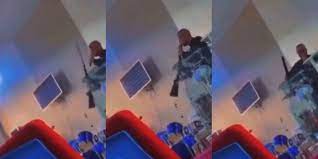 A video depicting the moment a Nigerian pastor entered a church armed with a rifle has sparked outrage on social media.

The yet-to-be-identified pastor can be heard telling the congregation in the video that he acquired the rifle in 1994 and the firearm has been licensed whilst assuring them to be at peace as he means no harm to his church members.

This comes after some parishioners lost their dear lives after an unscrupulous gang of armed robbers stormed the church and killed them.

It was reported that on Sunday, some unknown gunmen attacked a Catholic church in Owo and massacred all the members of the church brutally.

An eyewitness said “the herdsmen invaded the church during the Mass celebration at the Catholic Church in OWO. They killed all the people and kidnapped the priest! The videos are gory…the whole church filled with dead bodies and blood everywhere….they then bombed the premises after the massacre.”

Reacting to the video, social media users remarked that on the pastor’s next appearance in the church, he will come along with a bomb.

@Jamik Tufa wrote: “Wonders will never end, How does that help you in preaching the gospel?”

@Deborah Michael: “This is one of the weirdest things I have seen today.. I hope he teaches right with it.”

Watch The Video Below

Pastor shows up in church with his gun. pic.twitter.com/8YmyzcDq3d