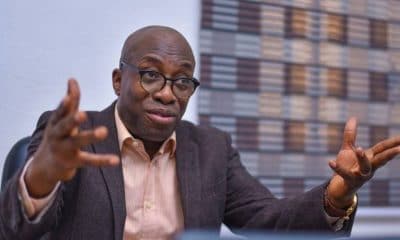 An aide of former Vice President Atiku Abubakar, Segun Showunmi, has called out the Governor of Ekiti, Kayode Fayemi, for addressing Governor Dapo Abiodun as the ‘Eleyi of Ogun State’.

It was reports that Fayemi, during a rally of the All Progressives Congress (APC) in Ado-Ekiti on Tuesday, jocularly introduced Abiodun as the ‘Eleyi of Ogun State’.

Fayemi, who provoked Abiodun and others at the rally into laughter, was making a humorous reference to Bola Tinubu’s outburst in Abeokuta before the APC presidential primary election.

Since yesterday, supporters of Abiodun and some of his aides have been addressing him as the Eleyi of Ogun State, saying Fayemi has finally formalised the appellation.

But, it appears Showunmi is not pleased with the title, asking the Ekiti Governor to stop the joke.

The chieftain PDP said “Abiodun must be addressed as Governor Dapo Abiodun of Ogun State!”

According to him, “it is bad that Bola Tinubu, now presidential candidate of the APC, could refer to the governor of Ogun State in such a despicable manner in his desperate outburst while under pressure during the campaign.”

Referring to Fayemi, Showunmi said, “By what parameter does the under-performer, funny sounding Fayemi, now to be known as ‘Odesin’ of Ekiti, (apologies to king sunny Ade who used the word to describe a dunce otherwise known as mumu.) call Dapo Abiodun Eleyi of Ogun State?

“That not-so-funny way of addressing the governor of Ogun is unacceptable and must stop forthwith, otherwise we will return the favour.

“A governor is the symbol of the ego of the people he represents, as such great care must be taken that protocol and diplomatic courtesies must always be in place. Otherwise, undue hostilities will be promoted and in some cases, it leads to unnecessary consequences.”

Showunmi explained further that, Dapo Abiodun, while he remains as governor of Ogun, would not be subjected to the butt of jokes in the committee of states for it goes beyond him as an individual.

He said: “Gov Abiodun represents the highly sophisticated, justly proud and historically established peoples of Ijebu, Remo, Awori, Egun, Egbas, Owus and so many others.

“I suppose there is no need to reel out our preeminent personalities and their achievements, that will not be necessary lest we become boastful; but suffice to say that no one should address our governor in such unsavoury language.

“That he and his team choose to make lemonade out of the sour lemon thrown at them speaks to just how princes don’t fight like slaves. Enough of this Eleyi appellation!”