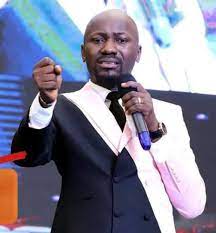 As the 2023 presidential campaign gradually kicks off, Apostle Johnson Suleman of Omega Fire Ministry has warned against mocking the health status of candidates.

It  reports that the presidential candidate of the All Progressives Congress, APC has suffered several attacks from critics over the uncertainty surrounding his health.

Several video clips had emerged on social media alleging that the former Lagos State Governor has an undisclosed health challenge.

Reacting, the popular clergy in a post on his verified Facebook page on Wednesday said that good health is from God,

He warned against using someone’s health status to market other candidates.

He wrote, “In as much as sound health is of the essence in leadership, I still maintain that ‘mocking’ people with their health status is way too low.

“Good health is from God. Unguarded and uncouth utterances aren’t the best tool for marketing your preferred candidate.