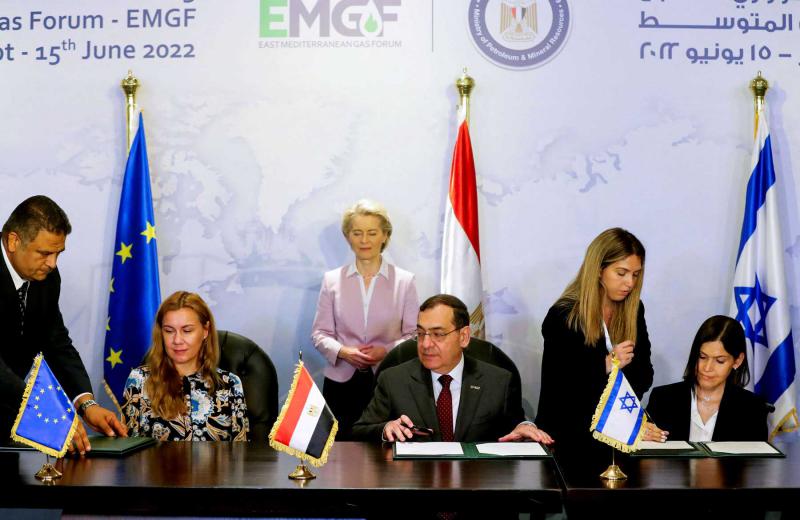 SIGNED &SEALED: The tripartite agreement will allow ‘significant’ exports of Israeli gas to Europe for the first time.

The European Union, Israel and Egypt have signed a tripartite natural gas export deal as the bloc seeks to diversify away from Russian energy.

The deal, finalised on Wednesday at the East Mediterranean regional energy conference in Cairo, will allow “significant” exports of Israeli gas to Europe for the first time, the Israeli energy ministry said.

“What a special moment,” European Commission chief Ursula von der Leyen said in a joint news conference alongside the Egyptian and Israeli energy ministers. “I very warmly welcome the signing of this historic agreement.”

Von der Leyen said on Twitter that the agreement would contribute to Europe’s energy security.

Last year, the EU imported roughly 40 percent of its gas from Russia. Countries have been struggling to reduce that dependency in order to sanction Russia over its ongoing invasion of Ukraine.

The signing of the memorandum of understanding in a five-star Cairo hotel comes a day after von der Leyen and Italian Prime Minister Mario Draghi embarked on energy talks with Israeli foreign minister Yair Lapid.

“It is an outstanding step bringing our energy cooperation to the next level,” von der Leyen said on Tuesday while visiting Israel.

The EU Commission chief stressed that the memorandum of understanding would increase the bloc’s “independence,” glossing over its newly-found reliance on Cairo and Tel Aviv, which are both accused of grave human rights violations and war crimes.

Israeli gas will be brought via a pipeline to Egypt’s LNG terminal on the Mediterranean, where some will be liquefied and transported on tankers to European shores.