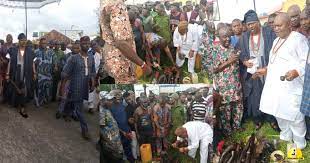 At least 38 worshippers were gruesomely murdered by the terrorists who attacked the church on June 5, 20222.

The brief event saw the worshipers, Olowo and other ‘ogun’ enthusiasts ditching out ancestral curses on the perpetrators with the staunch belief that in no distant time nemesis will catch up with them.

Pictures and video clips show Olowo moving to the site of invocation with Chief Dada Aderobagun, the Olu Ode of Owo Kingdom performing the rituals that preceeds raining of curses on the evil doers.

The Special Assistant Media to the Olowo of Owo, Mr Sam Adewale, explained that the attack on 127 worshippers necessitated the invocation of Ogun curses on perpetrators of the gruesome attack on Owo community.