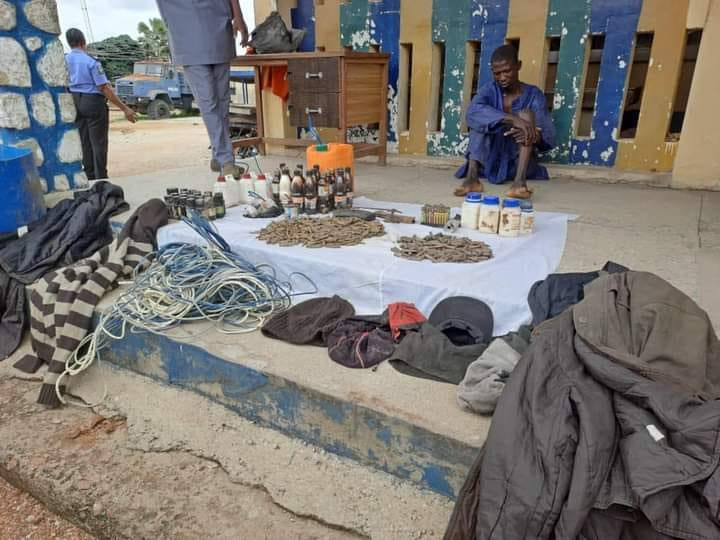 Parading the suspect at the Police Headquarters in Jalingo on Thursday, June 16, the State Police Commissioner, CP Abimbola Sokoya told journalists that Usman, 37, from Kebbi State, was arrested when he attempted to kill one Usman Yaki of Gunduma village in Gassol local government area of Taraba State.

The CP said the suspect had confessed to being a member of the Boko Haram terrorist group and a kidnapping syndicate terrorizing Niger, Kogi and Taraba states.

According to the police boss, the suspect had also confessedto being behind the two bomb attacks on Jalingo recently.

“This press briefing is in line with our tradition of keeping the press updated with timely and accurate information on happenings in our line of duty towards promoting necessary awareness for security of lives and property in Taraba State,” the CP stated.

“Taraba State Police Command, is working hard to ensure that the state is not a safe heaven for criminals and unscrupulous elements. During the period under review, the Command has put in enormous efforts in order to reduce crime and criminality and has achieved results.

“On 9/6/2022 at about 2100hrs, one BALA USMAN ‘M’ of Tella Town, Gassol Local Government Area who armed himself with a pistol scorpion loaded with seven rounds of live ammunition, went to the house of USMAN YAKI ‘M’ of Gunduma village, via Mutum biyu town attempted to kill him. The suspect fired one round of live ammunition, and Police were alerted in collaboration with the Vigilante, and the suspect was subdued and arrested.

“During the course of investigation, the suspect confessed that he is a member of Boko Haram, Armed Robber and Kidnapping syndicate that terrorized Niger State, Kogi State and Taraba State

“Concerted efforts are ongoing to arrest, Abubakar Lawal and ABDULLAHI GARBA and others now at large, who are members of the syndicate. Investigation into the case in progress.” he added.