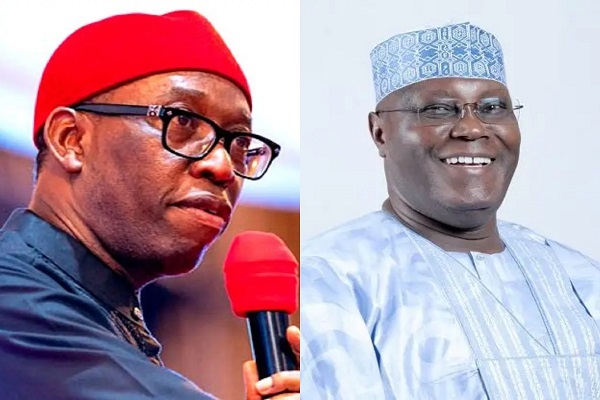 The Southern and Middle Belt Leaders Forum ( SMBLF) has rejected the presidential running mate to former Vice President, Atiku Abubakar, the presidential candidate of the Peoples Democratic Party (PDP) governor of Delta State, Dr. Ifeanyi Okowa for accepting his nomination to run for the 2023 general elections.

The statement noted that the 17 governors of the Southern States, both of the Peoples Democratic Party (PDP) and the All Progressives Congress (APC), under the Chairmanship of the Governor of Ondo State, Rotimi Akeredolu, met in Asaba, the capital of Delta State on May 11, 2021, and took far-reaching decisions, that based on the principles of fairness, equity and justice, the presidency should rotate to the South at the end of the statutory eight years of President Muhammadu Buhari’s tenure.

It stated that the Southern governors later met again in Lagos, on July 5, where they reaffirmed their decision, and again in Enugu, on September 16, to restate the call that the presidency should rotate to the South in 2023.

According to the statement, “It is unspeakable and quite disappointing that Governor Ifeanyi Okowa, who is currently Chairman of the South-South Governors’ Forum, and a native of Owa-Alero in Ika North-East Local Government Area (one of the Igbo-speaking areas) of Delta State, would exhibit such barefaced unreliability.”

The statement lamented that it was most unfortunate that Okowa, who should know better, accepted his appointment as running mate to Alhaji Atiku Abubakar.

The forum noted that it had nothing personal against Ifeanyi Okowa, but described his action as “treacherous and tantamount to a despicable pawning of the political future of the people of Southern Nigeria.”

Governor Okowa has, according to the statement, by his action, betrayed the trust reposed on him by his colleagues, the southern governors, the entire good people of southern Nigeria and all well-meaning Nigerians.

It stated that he has made himself persona non grata, not only with SMBLF but all citizens who treasure their oneness and yearn for a more united and peaceful Nigeria.

The statement opined that it is not a matter of loyalty to one’s political party but rather a greedy, parochial and unpatriotic action committed against the general interest of his State, Delta State, the Niger Delta region and Southern Nigeria.