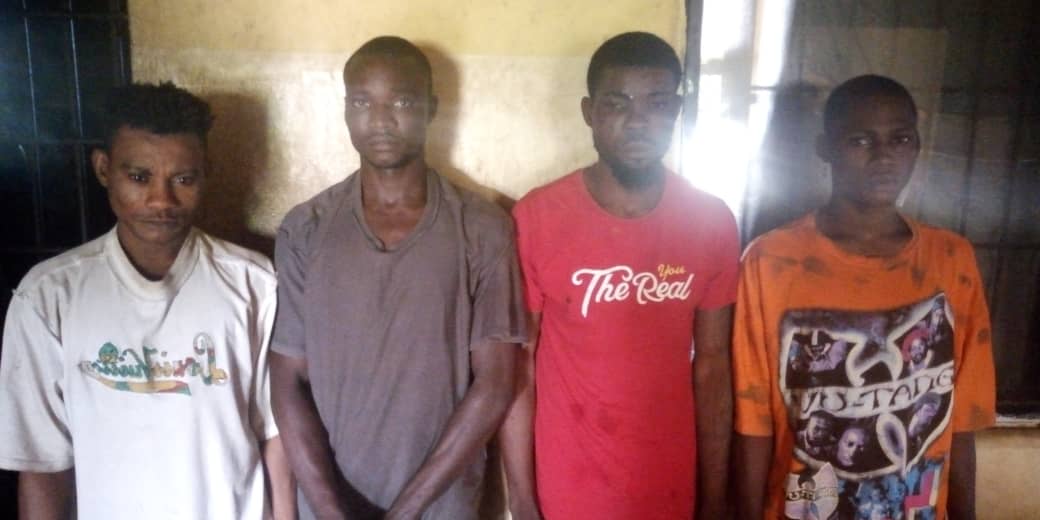 The police in Ogun State have arrested six men said to be members of a notorious cult group.

The six, it was gathered, have been on the wanted list of the command “for their roles in various cult clashes in Sagamu and it’s environs.”

Their activities, It was  learnt, have led to the death “of not less than four persons in the Sagamu area of Ogun State.”

It was reported earlier that cultists had taken over Sagamu town, killing about 10 persons in a few days.

In a statement by the command’s spokesperson, Abimbola Oyeyemi, on Sunday, the six arrested suspects are Rafiu Osokoya, (a.k.a Osama), Azeez Abiola (a k.a Scofield), Ogunsanwo Waheed (a.k.a 50cent), Toheeb Ayodele (a.k.a Emir), Kolawole Adegbenro and Azeez Taiwo.

According to Oyeyemi, the suspected cultists apprehended were arrested following information received by the CSP Shobiyi Oluwatoshin-led anti-cultists unit.

The unit was reportedly informed that the “hoodlums” were holding a nocturnal meeting along Ayepe/Odogbolu.

Their meeting, according to Oyeyemi, was on “how to unleash another round of terror in Sagamu.”

“Upon the information, the team moved to the area where the suspects were rounded up, but some of them escaped.

“On interrogation, the suspects confessed belonging to the dreaded Eiye cult group who have been unleashing a rain of terror in Sagamu since the beginning of this year.

“They confessed to the killing of one Animashaun in Sagamu and another person simply identified as Ekwe also in Sabo area of Sagamu.

“They further confessed that their group was responsible for the death of one Adigun and Elewure, both of whom were killed at Isote area of Sagamu early this year during one of their nefarious operations,” Oyeyemi said.

Meanwhile, the Commissioner of Police, Lanre Bankole, has ordered a manhunt for the fleeing members of the gang, directing that the arrested suspects be arraigned as soon as possible.