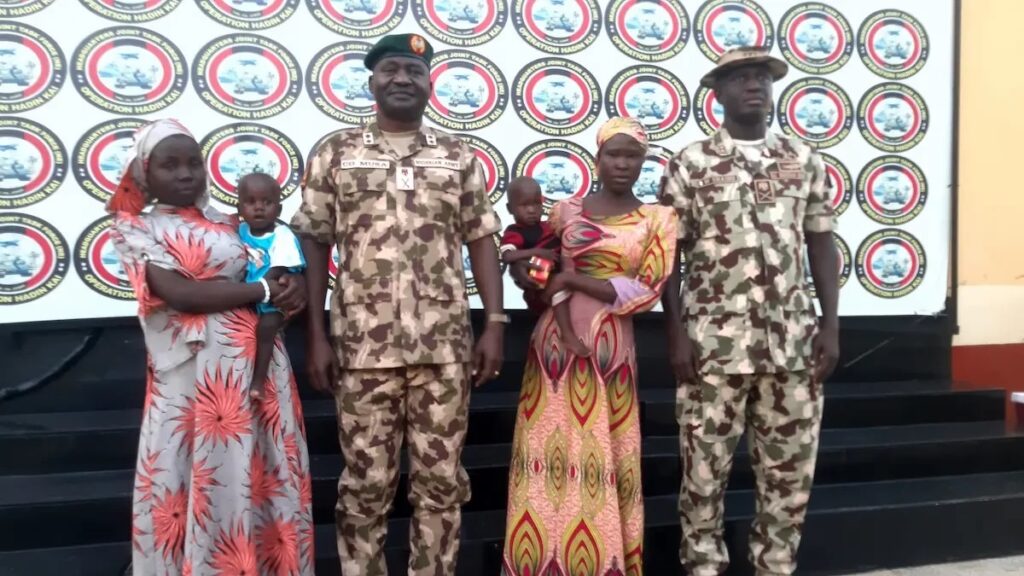 Two of the schoolgirls abducted by Boko Haram terrorists from Government Secondary School Chibok in 2014, have narrated their 8 years ordeal in Sambisa forest.

Hauwa Dauda and Mary Joseph were rescued with their children by the military troops of Operation Hadin Kai after their escape from Boko Haram camp.

According to Theatre Commander Major General Christopher Musa, the girls were rescued as a result of massive military operations in Sambisa Forest, Mandara Mountain, and the Lake Chad area.

Speaking to journalists during a brief press conference at the Command-and-Control Centre Maimalari Cantonment in Maiduguri on Tuesday, June 21, Hauwa and Mary said that they had been married off to Boko Haram fighters for years and both had babies for them.

The survivors further claimed that the Nigerian military had killed their husbands months ago.

They also claimed that about 20 other Chibok schoolgirls are still in Sambisa forest.

“Yes I know him, I used to see the late Abubakar Shehau,” she said.

She continued, “Yes, there are still other Chibok girls in the Sambisa Forest. They also have been married, at least more than 20 are still there,” she began to mention their names one after the other,”

“I was 18 years old when they abducted us and I converted to Islam, I was Christian but they converted us to Islam and married us off.

“We thank God that we are finally out, we have suffered after our husbands were killed, life was hell for us. We sincerely thank the military for rescuing us.”

On her part, Hauwa said she never saw the late Shekau in person.

“I have never seen him face to face but I used to watch him on a laptop giving instruction to the fighters.” Hauwa said.

They thanked the military for rescuing them after being held captive by Boko Haram for eight years.

Musa noted that the girls were rescued in Sambisa while assuring that they won’t rest until the remaining abductees regain their freedom.

The General Officer Commanding GOC Seven Division Nigerian Army Major General Waidi Shaibu said the girls, rescued between June 12 and 14, have received necessary medical attention and would be handed over to the appropriate authorities shortly.

General Shaibu said the girls and their children had undergone proper medical check-ups and treatment, before handing them over to the Government that would subsequently reunite them with their parents.

Over 100 of the girls are still missing seven years after the kidnapping.