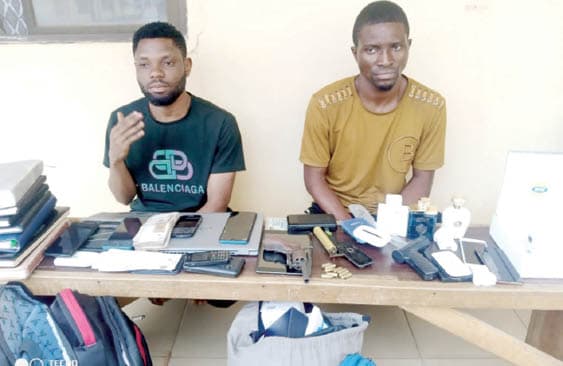 The Police operatives attached to Benue State Command have nabbed two University Students for their involvement in a robbery at New GRA in Makurdi.

Police spokesperson in the state, SP Catherine Anene, in a statement disclosed that the suspects were Sapele Great and Hakem Joseph Adi of the Joseph Sarwuan Tarka University, Makurdi (JOSTUM).

The statement reads in part: “On 5/4/2022 at about 1030hrs (10:30am), the Commissioner of Police, Benue State, Wale Abbas, received a report that on the same date at about 0300hrs armed robbers broke into a house at New GRA, Makurdi, and made away with ATM cards, phones and other belongings. The robbers transferred N300,000 from the victim’s accounts using the stolen ATM cards.

“The CP deployed a team of detectives to trail and arrest the suspects, but the suspects who knew that they were being trailed took to their heels until 15/6/2022 when two of them: Sapele Great and Hakem Joseph Adi of different addresses were arrested in Makurdi.”

She said items recovered from the suspects included one locally made pistol, eight phones, one shocking device, 18 SIM cards of different networks, one UBA cheque book belonging to Agasha Philemon Assume and other electronic devices.