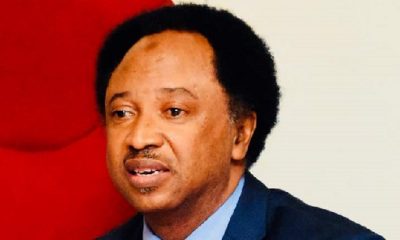 Recall that the apex court on Friday last week, ruled that Islamic female students should be allowed to appear in Lagos State public schools with their hijab.

The development, which angered many Christians, triggered a Lagos-based human right lawyer, Malcom Omoirhobo to appear in the Supreme Court in Abuja on Thursday, dressed as a native doctor, claiming it is his own religion.

It was reports that more other lawyers and individuals have vowed to frustrate the ruling by dressing in their own traditional attires to public places.

Reacting, Shehu Sani in a post on his verified Facebook page, expressed anger over the ongoing protests against the approval of hijab.

According to him, the lawyer and other aggrieved Nigerians should remove their clothes completely instead of dressing in traditional attires.

He wrote, “The lawyer who went to the Supreme Court in the garb of a Herbalist or Traditional religionists should have gone there naked; that is the original appearance of our ancestors hundreds of thousands of years ago.

“If you don’t like the Hijab ruling, remove your clothes completely and cover some parts with leaves and the protest is real”.