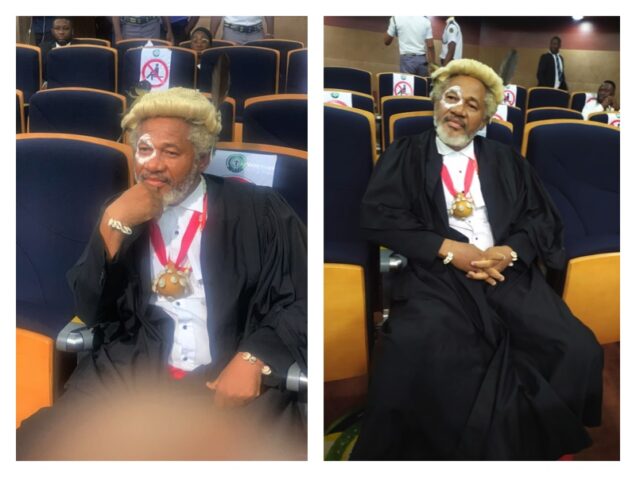 An Islamic human rights organisation, the Muslim Rights Concern (MURIC), has slammed lawyer Malcolm Omirhobo, who appeared at the Supreme Court on Friday dressed as a traditional doctor.

Mr. Omirhobo claimed that he was reacting to the Supreme Court judgment that allows female Muslim faithful to go to schools in Lagos in hijab.

MURIC said the lawyer’s behaviour is not only contemptuous of the Supreme Court pronouncement but also provocative, condescending, and irreconcilable with the noble profession of law.

MURIC’s position was contained in a statement issued on Saturday, 25th June, 2022 by its director, Professor Ishaq Akintola.

“The Islamic rights group said it was not surprised by the lawyer’s action, citing his previous personal record of going to the “court over the existence of Arabic letters on naira notes; challenging the use of Arabic on army logo; and suing the Nigerian Police for approving hijab for police women in Nigeria.

“Omirhobo has behaved to type. If he has his way, he would have every single Muslim Shugabad out of Nigeria. He hates the sight of Muslims, their Qur’an and the language of that Holy Book, Arabic. His hatred reached boiling point when the highest court in the land approved the use of hijab for female students,” the group said.

“This pushed him to the extreme behaviour which millions of Nigerians saw him manifesting on television yesterday.”

MURIC said that the human rights lawyer should have licked his wounds privately and gently after the court ruling, instead of taking his anger and frustration to the apex court.

According to the Islamic rights group, the lawyer’s action is contemptuous of the Supreme Court ruling and also provocative, condescending, and goes against the practice of law.