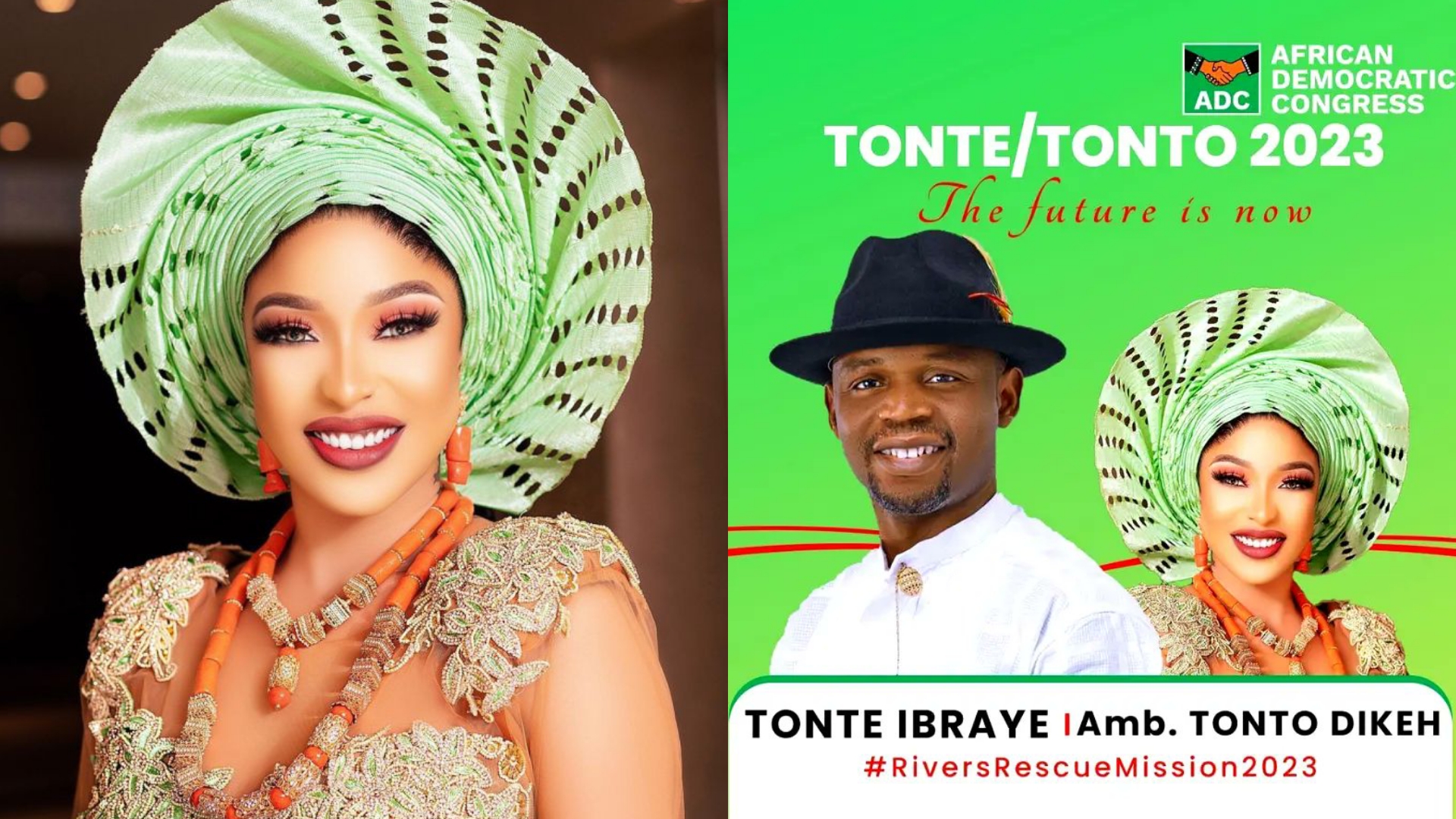 Nigerians have reacted to the emergence of Nollywood star, Tonto Dikeh as a deputy governorship candidate in Rivers State.

It was  earlier reported that Dikeh was picked as the running mate to the governorship candidate of the Africa Democratic Congress (ADC) in Rivers State, Tonte Ibraye, for the 2023 election.

The actress took to her Instagram page on Friday morning to make the announcement alongside their campaign poster with the hashtag ‘Rivers Rescue Mission 2023’.

Dikeh expressed appreciation to the Governorship candidate, stating that they are looking forward to investing massively in social protection, creating social value for young people and increasing women’s inclusion in the governance system.

She added that they would be supporting small businesses and strengthening the traditional institution to be active players in the drive to bring sustainable development.

Reacting to the development, some Netizens took to the micro-blogging site, Twitter on Friday to mock the actress over her emergence as running mate.

They also slammed the ADC for choosing Dikeh as a deputy governorship candidate following a series of controversies surrounding the actress while others hailed her emergence. See some of the reactions below.

Alex Teflondon@lex_Teflondon
Tonto dikeh emerging as a running mate in the ADC is actually a welcome development…. Although she might have some little touches in her brain but i think we should encourage more women in politics

𝙶𝙸𝙳𝙴𝙾𝙽 𝙴𝙺𝙾𝙽𝙶 ★ ★ ★ ★ ★ 🏴‍☠️@EL_GEEZZE
Journalist: Madam, can you tell us what your Administration plan to achieve in its first 100 days if elected into office.

Sir David Onyemaizu🦍@SirDavidBent
I think the ADC should be a political party featured in Nollywood. Imagine ousting out brilliant candidates like Kingsley Moghalu and Chukwuka Monye, only to let Tonto Dikeh be the running mate of a governorship candidate in Rivers? Tonto Dikeh? Bobrisky’s paddy? Must be ment.

Senator Shehu Sani@ShehuSani
Tonto Dikeh’s emergence as the Deputy Governorship candidate in Rivers State is good for Democracy.This is a great challenge to other Female Nollywood and Kannywood stars;to step out of the screen to the ring.I’m not unaware that others have tried in the past.

#StopTheSoot@1_Firstlaideete
What is the problem with Tonto Dikeh being a deputy governor?

‘Déróunkẹ́ ‘Dákẹ́jà@ronniebee3
I will not see this alone, Tonto for deputy governor

AURACOOL@TWEETORACLE
ADC has shown they are NOT a party to be taken seriously.
With all due respect, who ousts veteran leaders like Kingsley Muoghalu and Chukwuka Monye to pick Tonto Dike as the running mate to the Rivers State Guber Aspirant.
I hope its all for clout cos that’s not serious!

OMOTAYO Of Lagos 💥@Tee_Classiquem1
This 2023 election is just coming with different type of suprises, Tonto Dikeh is the deputy governorship candidate of ADC in rivers state, are you sure this people are really serious about winning this election?