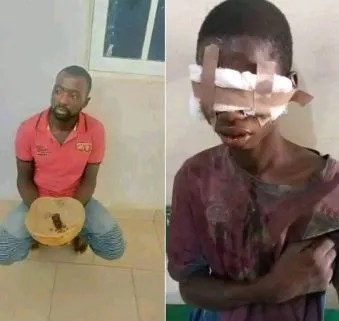 Three suspects have been arrested for allegedly plucking the eyes of a 16-year-old boy, Uzairu Salisu, who was recently found in his pool of blood at Dutsen Jira, in Yelwa area of Bauchi metropolis.

Bauchi police spokesperson, SP Ahmed Wakili, in a statement said the command had begun investigation into the heinous crime.

He stated that the victim had been taken to hospital for medical attention.

He further stated that the prime suspect, 32-year-old Isaac Ezekiel from Rafin Zurfi in Bauchi metropolis, had been arrested.

He said that the suspect had “voluntarily confessed to have perpetrated the crime”.

Wakili said that other suspects had also been arrested in connection with the crime.

He stated that the police operatives recovered the eyeballs in a calabash, following a prompt search of the prime suspect’s house.

He said that the operatives also recovered a cable wire used in perpetrating the act and a travelling bag, containing some charms.

“Our findings revealed that in April, the prime suspect conspired with the two others to conceive the idea to commit the atrocity of getting the eyeballs of a human being.

“On June 24, at about 0900hrs, the principal suspect lured the victim into a nearby bush for a casual job on his farm.

“He then used a cable wire to strangle him until he fell into coma.

“Thereafter, he used a knife to remove the boy’s two eyes for ritual purpose.

“Investigation is still in progress, after which the suspects will be charged to court,” Wakili added.

He said that the Commissioner of Police had charged the command’s operatives to ”remain fierce, tireless and relentless” in their fight against crime and criminality in the state.