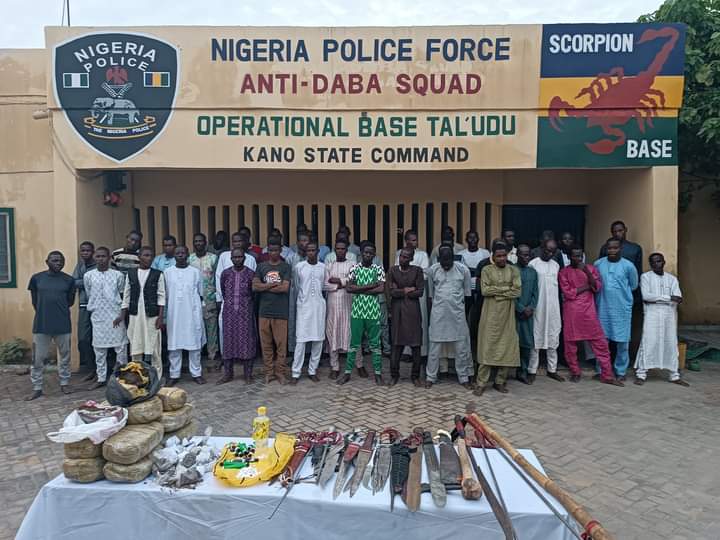 Spokesman of the command, SP Abdullahi Haruna Kiyawa, stated this in a statement issued to DAILY POST.

According to him “On the 26/06/2022 at about 1300hrs, reports were received that groups of thugs (‘Yan Daba) in large number with dangerous weapons blocked Kofar Na’isa and Kwanar Disu, Gwale LGA Kano in an attempt to attack and rob members of the public especially passersby and road users”.

He said after receiving the report, police were mobilized to the area and immediately cordoned off and the thugs trapped at “Filin Mahaha” and were arrested.

He explained that 45 suspected thugs (‘Yan Daba) were arrested with dangerous weapons and large quantity of illicit drugs.

Kiyawa said all the suspects confessed that they were invited from different parts of Kano Metropolis in the name of attending a wedding ceremony, and converged at “Filin Mahaha” smoking and taking different types of illicit drugs.

He said the Commissioner of Police directed a discreet investigation, after which the suspects will be charged to court for prosecution.

He further reiterated that criminals will have no hiding place in Kano State.