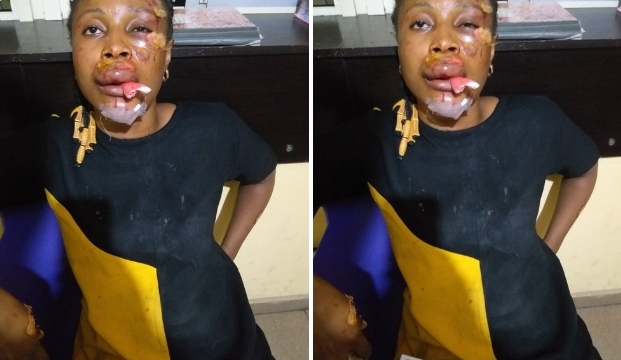 A woman was left with life-threatening injuries after she was pushed from a moving Minibus in Lagos state.

It was gathered that the woman who boarded the Korope bus from Sandfill asked the driver to drop her after she started sensing something unusual, but the bus driver instead increased the speed.

A twitter user, @groovereben who is the husband of the lady stated that they later pushed her out of the vehicle somewhere around Civic Centre.

Narrating the ordeal, he wrote:

On Tuesday evening my wife boarded a korope (mini bus) from Sandfill, on entering the bus she sensed something wasn’t right, she asked the driver to drop her, he refused but rather increased the speed.

When the bus got to somewhere around Civic Centre, V.I, they pushed her out of the bus. I want to thank the good Nigerian who rushed to her to Onikan Health centre. I also want to thank the security men, the nurses and doctors at Onikan health centre for giving her first Aid treatment before we arrived.

From Onikan health centre we were transferred to Marina General hospital. I also want to appreciate the nurses and doctors for being kind to us.

Dear Governor Babajide Sanwoolu please do something about the high level of kidnapping going on in Lagos.

The Police should increase the police monitor team from Ozumba Mbadiwe down to Epe, kidnappers have taken over that route.

I’m going to be paying over 600k for the treatment my wife sustained in this traumatic event.

I’m grateful to God my wife is alive, I’ve thought about all the things that could go wrong if they succeeded, the fact that she didn’t hit her head or chest on ground, Thank you my Lord and Saviour Jesus Christ.

Ya’ll please be careful out there.