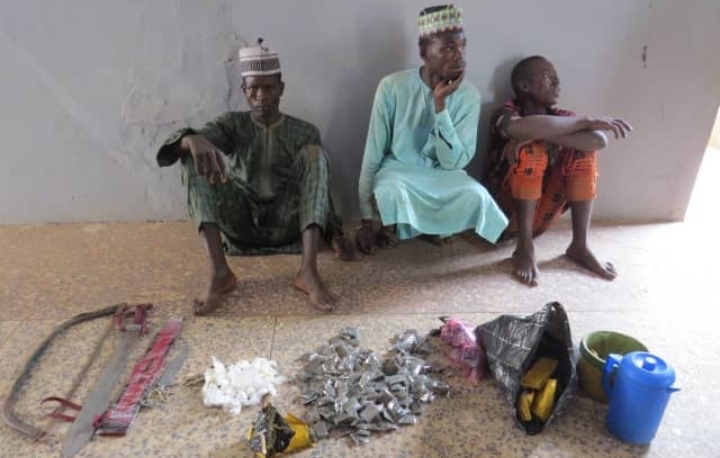 Police operatives arrests a three suspected hoodlums who planned to unleash violence against citizens before, during, and after the current political campaign season.

Disclosing this in a statement, the spokesman of the Command, DSP Sanusi Abubakar said illicit drugs and some deadly weapons were recovered from the suspects.

“In a move to prevent vulnerable youths from being radicalized and used as political thugs ahead of electioneering campaigns and snatching of ballot boxes, the police conducted an intelligence-led operation on the 29th of June 2022 which resulted in the arrest of the following insecurity elements for being in possession of illicit drugs and some deadly weapon while rehearsing to employ unprovoked violent actions on unsuspecting people in the state,” the statement read.

“This police action is the product of a sustained round-the-clock patrol by strategic commanders in the state as directed by the CP.

“It is in the light of the foregoing that the state commissioner of police, CP Muhammed Usaini Gumel FIPMA, psc is advising politicians to warn their followers to always respect the law and refrain from engaging in acts that could endanger human lives or escalate acts likely to cause destruction of property

“Therefore the police command is determined to to take decisive actions and ensure appropriate punishment of potential offenders according to extant laws and provisions of the constitution.

“The command is therefore using this medium to appeal to members of the public to be watchful on their children’s behavior and prepare them as advocate of peace.”