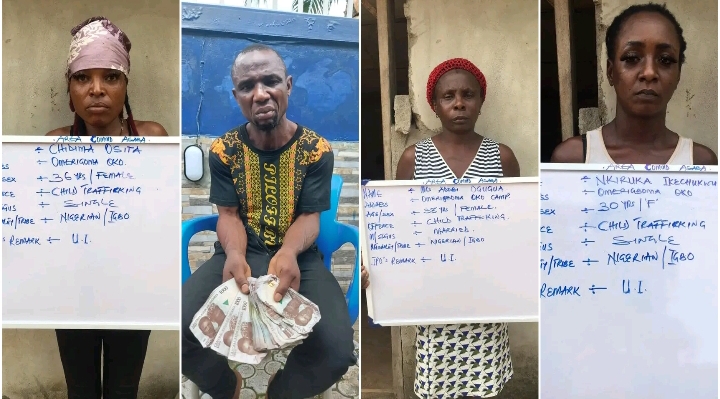 They were arrested following a complaint via petition to the Area Commander Asaba, written on behalf of a victim of child trafficking (Name withheld) age 13yrs, a native of Izza North LGA of Ebonyi State, who was to be taken to Onicha-Ugbo for prostitution.

Preliminary investigation revealed that, suspects were into prostitution, and on 22/6/2022, they arranged for a girl named Chidima surname unknown age 16yrs to be taken to Mali for prostitution. Investigation is ongoing and effort to arrest other members of the syndicate is ongoing.””

In a related development, the command has also arrested a man for being in possession of fake Naira notes. DSP Edafe who disclosed this in a statement released said operatives of Eagle-Net Special Squad while on routine patrol along Asaba/Onitsha bridge on June 28, sighted a mob, attacking a man at Oko new international market in Asaba.

He said the team rushed to the scene and rescued the suspect named Michael Ozor age 45yrs of Abakiliki in Ebonyi State.

“The suspect was alleged to have made a POS transaction with fake Naira notes with intent to defraud the POS operator. The suspect was arrested and fake naira notes to the tune of Eighty Thousand was recovered from him. Investigation is ongoing.” the statement read.