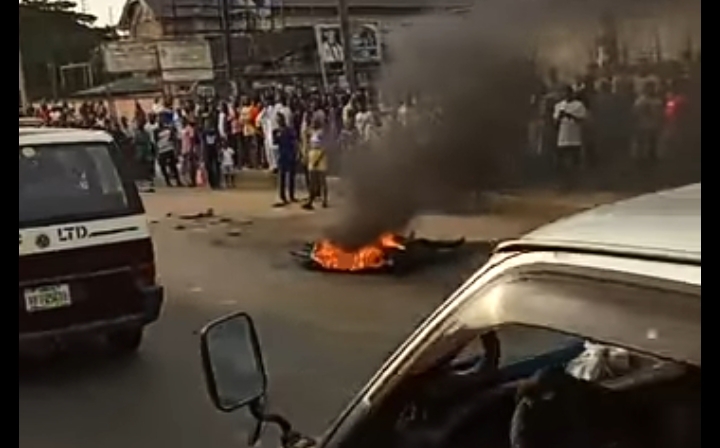 Three suspected robbery suspects met their waterloo after they were caught and set ablaze by angry youths in Abia state.

It was gathered that the robbers who were known for terrorizing Point of Sale operators at Abayi, along Aba–Owerri road, Aba, Abia State, were robbing roadside traders, fuel stations, and keke operators at Afor-ule, Umuimo, and Kamalu streets in the area when they were caught.

A source who was on the scene of the incident revealed that the robbers were caught after they had successfully robbed a PoS operator and some shops in the area. He said:

“After robbing the PoS operator and some shops, the robbers fled when people raised alarm. Some youths gave them a hot pursuit but they were knocked off their motorcycle by a moving vehicle. The youths caught up with them and set them ablaze; one at the opposite UBA Bank, others are burned at Union Bank junction and Star Paper Mill. These boys have been robbing PoS operators and shops.Today, nemesis has caught up with them.