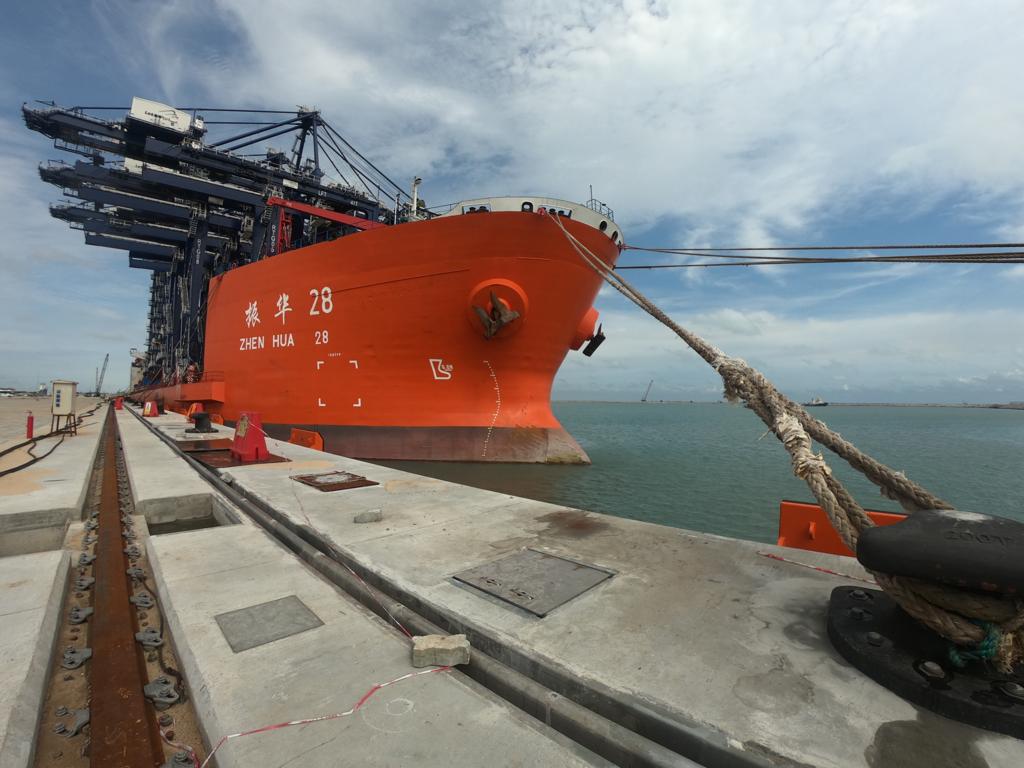 In what could best be described as a major milestone and a significant boost ahead of the commencement of port operations, Lekki Deep Sea Port, on Friday, 1st July 2022, took delivery of 3 Super Post Panamax Ships to Shore (STS) Cranes and 10 Rubber Tyred Gantries (RTGs) and also witnessed the arrival of the first vessel to berth at the port. The cranes and the RTG equipment will be used in the container terminal, which will be operated by Lekki Freeport Terminal, a subsidiary of CMA CGM Group.

The vessel “ZHEN HUA 28,” which conveyed the STS cranes and RTGs to Nigeria, left Shanghai, China, on May 17, 2022, and arrived at Lekki Deep Sea Port at about Noon Nigerian time on 1st July 2022.

Speaking after the vessel berthed, the Chairman of Lekki Port, Biodun Dabiri, expressed his great joy at the arrival of the STS cranes and RTG equipment at the port. He stated that the Zhen Hua 28 vessel could only berth in Lekki Port and nowhere else in the country due to the depth of the draught at Lekki Port.

He recalled how the port project was conceived during President Obasanjo’s presidency, and since then, Lagos State Governors starting from Asiwaju Bola Tinubu, Babatunde Fashola SAN, Akinwunmi Ambode, and now Babajide Sanwoolu, have contributed immensely to the development of the port. He also acknowledged the contributions of Tolaram and China Harbour Engineering Company, the promoters of the project.

On his part, Du Ruogang, the Managing Director of Lekki Port, explained that the cranes are highly sophisticated port equipment that will be used for the first time in Nigeria at Lekki Port, thereby putting Nigeria at the forefront of container operations in West Africa and on the global maritime map.

“This is the first batch of our port machinery; In August, we will mobilize the second batch of 2 STS and 5 RTGs. By the time of the formal commencement of the port operations, there would be 5 STS and 15 RTGs in place”, Ruogang said.

Also speaking, the Managing Director, Nigerian Ports Authority, Mohammed Bello-Koko, described the delivery of the cranes as quite historic as it signifies the readiness of the promoters of the port to take trade facilitation a notch higher while also optimizing the opportunities of the African Continental Free Trade Area (AfCFTA) agreement to which Nigeria is a signatory.

He disclosed that Lekki Port, being the first fully automated port, would contribute a great deal to enhancing port efficiency, adding that the NPA as a regulator is ready to work assiduously, under the technical guidance of the International Maritime Organisation, in the deployment of the Port Community System (PCS) to enable it to respond squarely to the dictates of global trade facilitation.

Xie Xianju, General Manager of China Habour Engineering LFTZ Enterprise (CHELE), the EPC Contractor of the port, also expressed his delight at the day’s events noting that Lekki Port is the first project in Africa for China Communications Construction Company (CCCC) and China Harbour Engineering Company (CHEC) which integrates investment, construction, and operations. He added that the project is of utmost priority to CHEC and China. He noted that the arrival of the port equipment is a huge morale booster and will spur them to continue to work hard to complete the project’s construction by the completion date.