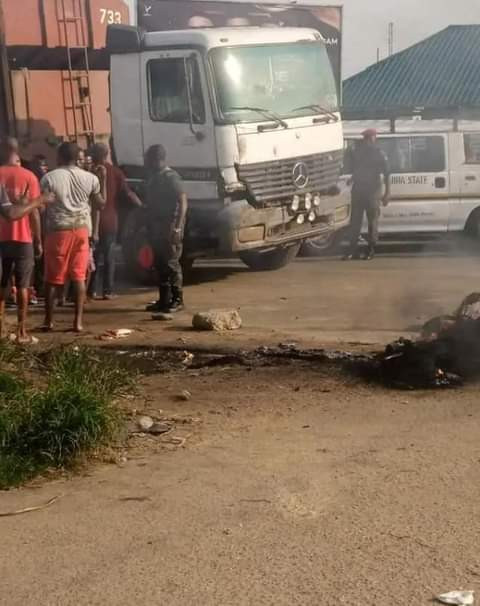 An Angry mob in Abia State set ablaze three suspected armed robbers in Aba Local Government Area of the state. It was reported that the men were allegedly among the criminals terrorising Point of Sale (POS) operators, traders, residents at Abayi, along Aba-Owerri Road, Afor-Ule, Umuimo and Kamalu streets in Osisioma axis of Aba. According to reports, the robbery suspects were set ablaze at different locations on Sunday, July 3.

One of the armed robbers was set ablaze opposite UBA building, while others were burnt at Union Bank junction and Star Paper Mill by Kamalu Street, all along Aba/Owerri Road. Eyewitnesses said that the men were caught by irate youths after they had allegedly robbed a POS operator and some shops in the area.

According to one eyewitness who begged to be anonymous said: “After robbing the POS operator and some shops, the robbers fled when people raised alarm. Some youths gave them a hot pursuit but they were knocked off their motorcycle by a moving vehicle. The youths caught up with them and set them ablaze. One at the opposite a Bank, others are burned at a Bank junction and Paper Mill. These boys have been robbing PoS operators and shops.Today, nemesis has caught up with them.”

Spokesperson of the State Police Command,Geoffrey Ogbonna, who confirmed the incident said the suspects were burnt to death on Sunday in an effort to escape the scene of the crime, adding that the situation caused gridlock along Osisioma.

The PPRO said: “The jungle justice is preventing police authority to further probe the activities of robbery kingpin in the area, which has been terrorizing the residents; we don’t know their names, even the suspect that escaped.”

While condemning the incident, he warned residents of the state against jungle justice. He said it is wrong to take laws into their hands as the Abia State Police Command will not tolerate the act whatever be the case. Meanwhile, a resident, Kenneth Tuga, who shared a photo of one of the suspects, said that five of them were set ablaze.