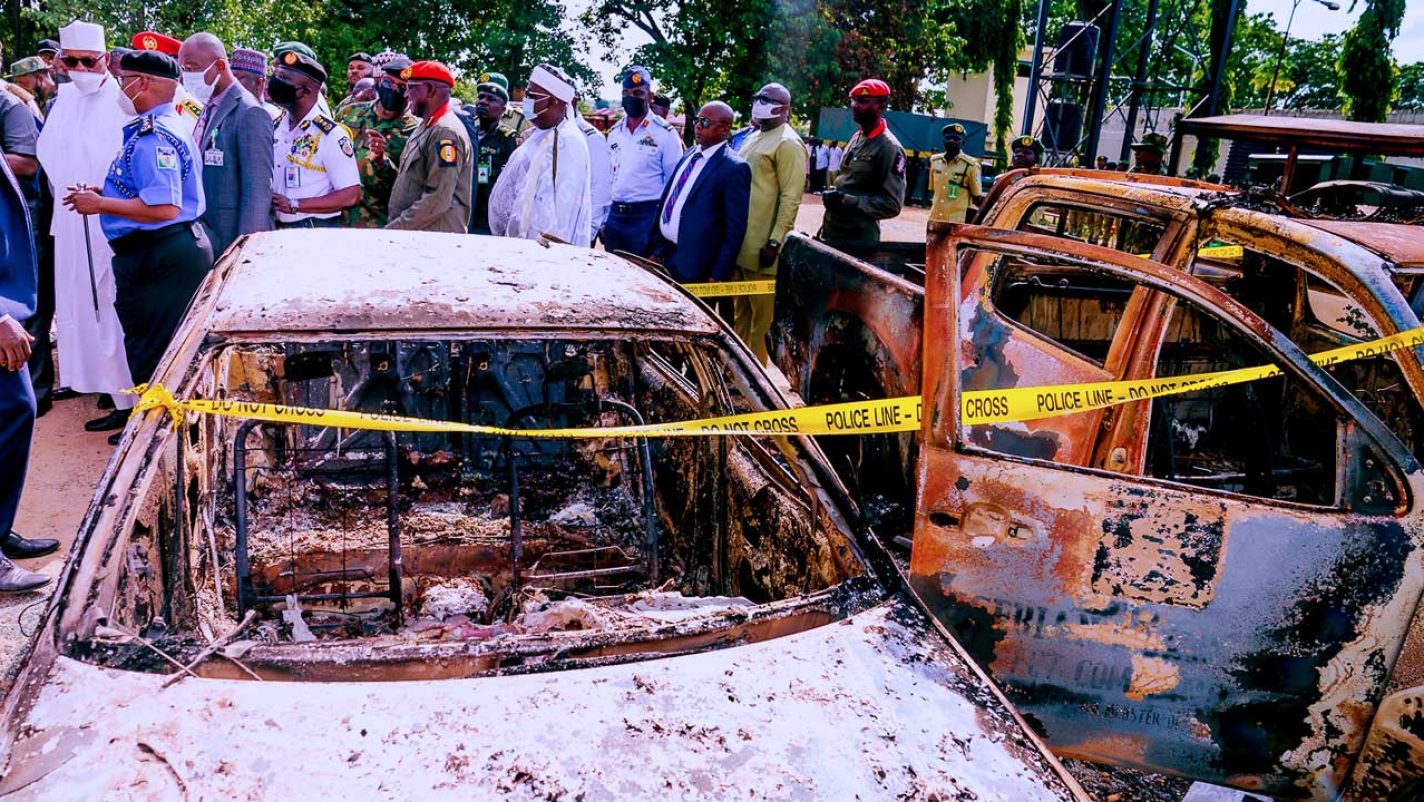 The nation received a galling shock reinforcing the threadbare state of security in the country when terrorists launched a late night attack on Kuje Correctional Centre in the Federal Capital Territory (FCT), Abuja and freed hundreds of inmates.

This came hours after bandits attacked the convoy conveying the advance team of security guards, protocol and media officers, ahead of President Muhammadu Buhari’s Sallah trip to his hometown in Daura, Katsina State, on Tuesday night.

An angry President Buhari, yesterday, expressed disappointment with collapsed intelligence in the Medium Security Custodial Centre, Kuje, when he stopped over at the prison to assess the level of damage while on his way to Senegal to participate in the International Development Association (IDA) for Africa summit in Dakar, Senegal.

Apparently miffed, the President said: “I am disappointed with the intelligence system. How can terrorists organise, have weapons, attack a security installation and get away with it?”

Shocked by both the scale and audacity of the attack, President Buhari queried: “How did the defences at the prison fail to prevent the attack? How many inmates were in the facility? How many of them can you account for? How many personnel did you have on duty? How many of them were armed? Were there guards on the watchtower? What did they do? Does the CCTV work?” he reeled out question after question.

The President, accompanied by the Secretary to the Government of the Federation, Boss Mustapha and the Chief of Staff, Prof. Ibrahim Gambari, at the end of the visit, directed “a comprehensive report” on the incident.

Earlier on arrival, the President was briefed about the attack by the Permanent Secretary, Ministry of Interior, Dr. Shuaib Mohammad Lamido Belgore and the Controller General of Nigerian Correctional Service, Haliru Nababa, who showed the bombed-out section used to access the prison, and the records office, which was set on fire, adding that the invaders had launched an attack on all cells in which Boko Haram terrorists were held.

The President was further apprised of the developments even as officials said none of the 64 Boko Haram terrorists held at the facilty could be accounted for, though their records were intact and backed up.

A statement by Senior Special Assistant on Media and Publicity, Garba Shehu, further explained that the President was informed of the re-arrest of 350 of the escapees while about 450 others could not be accounted for.

The Minister of Defence, Bashir Magashi, said 64 Boko Haram suspects escaped from the Kuje custodial after the attack on the facility. Addressing newsmen after taking an assessment tour of the facility, the Minister said the attack started around 10:30p.m. with heavy gunfire and explosions.

He said they came in their numbers, gained entrance into the prison and released some of the inmates who are now at large, adding that some had been recaptured.

“Very soon, we will give you the correct figure of the inmates that were taken, aside that, we are trying to see what we can do to ensure that all escapees are returned.

“The prison is accommodating about 994 inmates, over 600 escaped and many have been recaptured and brought back to the prison. Maybe by the close of the day, more will have been captured and returned.

“I think everything is under control and the people who came to do this activity, from the records, we believe they belong to a particular group. Most likely, they are Boko Haram members, because we have a sizeable number of Boko Haram suspects in detention, and currently, we cannot locate any of them.

“I think they are about 64 in the prison and none of them is available now, they have all escaped,” he said.

The presidency used the opportunity to react to mounting criticism over the trip to Dakar by the President, and to stress that governments don’t stop working because nations face terrorist threats.

“To cancel the trip to Senegal would mean that the terrorists are successful in calling the shots, something that no responsible government in the world will allow.”

The Service Public Relations Officer (SPRO), Abubakar Umar, had in a statement, revealed that the attackers had broken into the Medium Security Custodial Centre, Kuje, using explosive devices through the main entrance and the fence of the facility respectively.

He also revealed that one of the personnel of the Nigerian Security and Civil Defence Corps (NSCDC) attached to the Custodial Centre, died in the attack, adding that three personnel were seriously injured.

“A total of 879 inmates escaped from the facility during the unfortunate attack. As at the time of this report, 551 inmates are currently in custody, 443 inmates are still at large. Four inmates are dead and 16 inmates sustained injuries and are being treated at the moment. However, efforts are ongoing to recapture all fleeing inmates, ” he said.

Following the attack, business activities, including markets, schools, banks and shops were shutdown, as citizens remained indoors trying to absorb the shock. Some others temporarily relocated to find refuge away from Kuje for fear of the unknown.

“I have moved my family out of that place to somewhere else. We could not sleep in the night while the attack lasted and more over, security is no more guaranteed in that place,” said a resident who gave his name simply as Adeyinka.

THE Ansaru terrorists that attacked and abducted passengers of the Abuja-Kaduna bound train on March 28, this year, are likely responsible for the deadly Tuesday night Kuje prison attack, Tukur Mamu, media consultant to Sheikh Ahmad Gumi and negotiator for the kidnapped victims, disclosed yesterday.

In a statement, he said he shared intelligence with security operatives prior to the attack, but no prompt action was taken to prevent the horrific incident.

Mamu said the renewed threat by the terrorists to slaughter the remaining victims of the train attack was as a result of government’s failure to meet the terrorists’ demands.

Gumi’s spokesman also recalled that the terrorists requested for release of 51 of their members, but through power of dialogue and engagement, he was able to scale that number to only 10 and communicated with audio backing, regarding the development to relevant authorities.

IT was also gathered that soldiers guarding the Kuje prisons for eight straight months were posted out hours earlier on Tuesday before the attack took place, a highly placed source confided in The Guardian.

According to the source, the well-coordinated attack lasted for four hours without much effort by security guards on duty to repel the terrorists. The soldiers, who had just resumed duty, same day, were said to have fled the scene for safety, leaving the facility at the mercy of the attackers.

The source, which accused the government of negligence having received a security report to the effect earlier, questioned why the armoured personnel carrier stationed at the main entrance of the prison was not destroyed with bullets or explosives.

MEANWHILE, the Peoples Democratic Party (PDP) has condemned the spate of insecurity and the audacity with which terrorists ravage the country unchallenged under the All Progressives Congress (APC) administration.

The party noted that the simultaneous terrorist attacks on the advance convoy of President Buhari in Katsina State as well as the Correctional Facility in Abuja, the nation’s capital, “underscored the collapse of our security command and control structure under the failed, ineffective and uncoordinated Buhari-led APC administration.”

In a statement by its national publicity secretary, Debo Ologunagba, the PDP said the terrorist attack on President Buhari’s convoy in his home State of Katsina as well as the ferocious invasion and the freeing of hundreds of terrorists and criminals from the Kuje Correctional Facility further confirmed that Mr. President has lost control of the security of the nation and that Nigerians are no longer safe under the APC.

“The escalated spate of terrorism across the country has heightened apprehensions of complicity by the APC to open up our nation to more terrorist attacks with the view to stall the 2023 general elections.

The PDP asked the APC government to come clean on who ordered the reported redeployment of soldiers and who failed to act on the intelligence provided by the DSS.

Also, the presidential candidate of the African Democratic Congress (ADC), Dumebi Kachikwu, has called on President Buhari to resign amid worsening security situation in the country.

Kachikwu in a statement issued, yesterday, stated that the attack on the convoy of the President on its way to Daura, Katsina State as well as the simultaneous attack on Kuje Correctional Centre, Abuja, were clear indications that the country is currently faced with a grave security threat.

He wondered who is safe in the country if the President’s convoy could be attacked and a correctional centre, “which was just a few kilometers to the seat of power held hostage by terrorists.”

The governor, who noted that the call for state police is not for self-aggrandisement but a reality of the time, said this yesterday, while playing host to his former school mates at Loyola College, Ibadan, (1968/1972) set in his office, Alagbaka, Akure.

Akeredolu bemoaned the security situation in the country, adding that it has gone from bad to worse. He noted that the country’s security challenges have gone beyond Fulani herdsmen to the menace of bandits and ISWAP.

EARLIER, the families, relatives and friends of the remaining 50 kidnapped train passengers, yesterday, took to the streets in Kaduna, as they held a peaceful protest demanding the immediate release of the victims.

As early as 7:30a.m. the protesters stormed the Nagwamatse House located along the busy Ali Akilu road, Kaduna, holding placards with different inscriptions calling for the immediate release of the remaining abducted train passengers.

Addressing journalists, the leader of the family forum, Dr Abdulfatai Jimoh, said: “Today is exactly 100 days since our love ones were abducted, it was meant to be a journey of two hours, however, it turned out to be 100 harrowing days. Since then things have not been the same with us.”