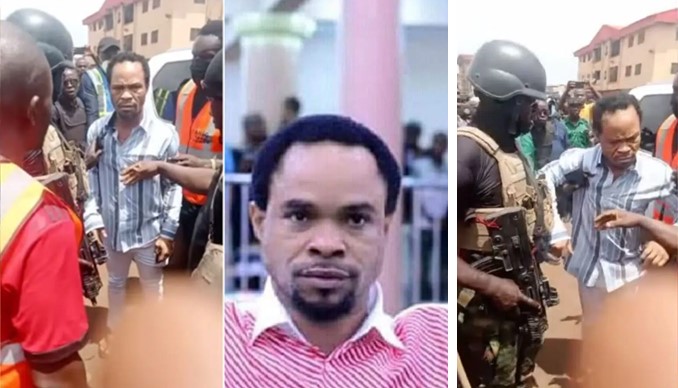 Chukwuemeka Ohanaemere, also known as Odumeje is the spiritual leader of the Mountain of Holy Ghost Intervention and Deliverance Ministry.

The demolition was carried out on Thursday by a joint team of state actors and police officers.

The government said the demolition was in line with the Onitsha Urban Renewal Plan of Governor Charles Soludo’s administration.

The structure was said to be erected along the Nwagene stream at the Odoakpu area and had to be removed.

During the exercise, Odumeje was assaulted by some Task Force operatives as onlookers watched.

They slapped and hit the cleric, accusing him of obstructing their assignment and attempting to stop work.

Video of the incident:

The moment Indaboski Odumeje church in Anambra state got demolished and he was slapped and manhandled by security agents and Tax Force personnel earlier pic.twitter.com/94WDrx9eFp