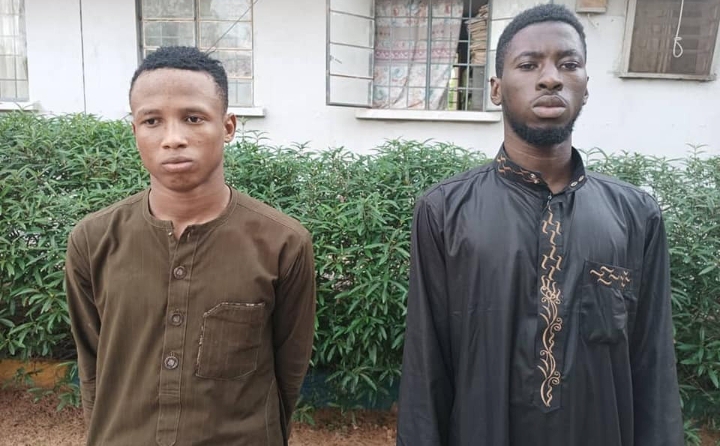 An 18-year-old robber was arrested after he raided a shop and used the proceeds to stay in a hotel with his girlfriend.

The suspected thief, identified as Sadiq Isma’il, 18, was arrested for burglary and theft in Kano state.

The SP said in a statement that a discreet investigation led to the arrest of the receiver of the stolen items, Abdullahi Muktar.

According to the PPRO, the principal suspect, Isma’il, broke into a shop at Sharada Quarters and made away with the sixteen Plasma TV sets valued at N1.2m.

The suspect confessed that he sold all the stolen TV sets for N350,000:00) and used part of the money to lodge in a hotel with his girlfriend.

“Sustained intelligence-led follow-up resulted in the arrest of the principal suspect, Sadiq Isma’il, ‘m’, 18 years old, of Rijiyar Lemo Quarters Kano, at a Hotel in Nassarawa LGA, Kano State where he lodged. On preliminary investigation, the suspect confessed that he singlehandedly went to the shop around 2300hrs of 21/06/2022, broke the window and made away with the sixteen (16) Plasma TVs.

“He further confessed that he sold all the sixteen(16) Plasma TVs at Three Hundred and Fifty Thousand Naira (N350,000:00), at Twenty One Thousand, Eight Hundred and Seventy-Five Naira (N21,875:00) each, where he used part of the money to lodge in a hotel with his girlfriend.

“Discreet investigation led to the arrest of the receiver, one Abdullahi Muktar, ‘m’, 20 years old of Gama Quarters Kano at the same hotel with the principal suspect. He led to the recovery of eleven (11) of the stolen Plasma TVs from the Kano and Bauchi States.”