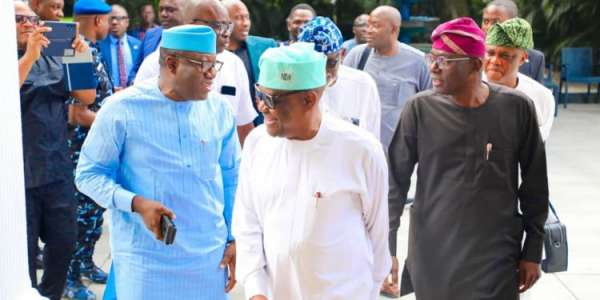 Details have emerged concerning the meeting of three governors elected on the platform of the All Progressives Congress (APC) with Governor Nyesom Wike of Rivers State.

It was reports that Wike and his loyalists are at loggerheads with the leadership of the Peoples Democratic Party (PDP) after the conduct of the presidential primary, which produced Atiku Abubakar as the candidate and the emergence of Delta State Governor Ifeanyi Okowa, as Atiku’s running mate.

Following Atiku’s emergence and his choice of Okowa, some members loyal to Wike have called for the immediate resignation of Senator Iyorchia Ayu as the party’s national chairman.

Wike, who has kept silent since Okowa emerged as the PDP running mate, has been fraternizing with political bigwigs from other political parties.

The APC has now decided to take advantage of the crisis rocking the main opposition party to convince Wike to join the ruling party.

When asked by reporters what their visit was about, Fayemi reportedly said, “it was a Sallah visit.”

A top government official in the state who did not want his name mentioned told The PUNCH that the APC governors told Wike to join them in their quest to win the 2023 presidential election.

The source said, “The plan is to woo him to our side since his party seems to be ignoring him. We asked him to work with us.”

Asked what Wike’s response was, the source said, “Well, you don’t expect him to jump at the offer. This is because his party already had a candidate for all the elective positions, especially in his state. But we want him to work with our presidential candidate, Asiwaju Bola Tinubu. But he gave us no commitment.”