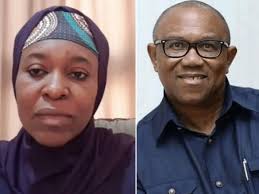 Aisha Yesufu, a popular socio-political activist, has said that the two leading political parties, the Peoples Democratic Party, PDP, and the All Progressives Congress, APC, will have to join forces in order to defeat Peter Obi, the candidate of the Labour Party, LP, in the forthcoming presidential election.

Aisha, who is co-convener of BringBackOurGirls, BBOG, advocacy group, noted that 2023 is not for big money spenders.

According to her, “The rate at which this is going, the call will soon be for PDP and APC to join forces for any of them to have hope of winning!

“Time is the enemy of politicians that have to spend money for anything to be done and the friend of the politician that the people are ready to spend for.”

Reports in Nigeria suggest that the LP candidate, Peter Obi is gathering an enormous support from the electorates, especially the youths.

After days of speculations, Senator Yusuf Datti Baba-Ahmed has been picked as running mate to Obi.