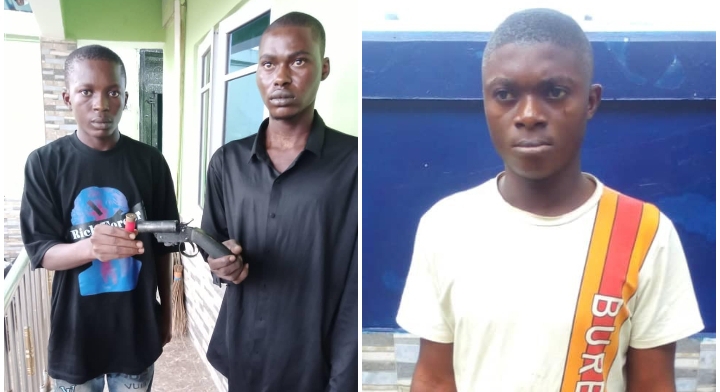 Police operatives in Delta State have foiled a plot to kidnap a prominent chief in Ndokwa East Local Government Area of the state.

The operatives also arrested the leader of the gang, spokesperson of the command, DSP Bright Edafe said in a statement.

Edafe stated that two suspected armed robbers were arrested along along Sapele-Warri Expressway, adding that three locally made guns, one pump action gun, cartridges and a stolen vehicle were recovered from the suspects.

“On 5/7/2022 at about 1430 hrs, acting on intelligence gathered that a kidnapping syndicate has perfected plans to kidnap one prominent chief (Name withheld) of Ogume community in Ndokwa East LGA, the Commander Eagle-Net Special Squad, SP Usman Dimka, detailed operatives of Eagle-Net to ensure that their plan is foiled and the gang arrested.

“The resilience and unrelenting efforts emplaced by the operatives aborted the purported kidnapping plan and led to the arrest of a suspect and leader of the gang, one Chukwuemeka Ochu ‘m’ age 27yrs of Nuke Mba Street, Obiaruko in Nkwani LGA. Investigation is ongoing while efforts are on to arrest the other fleeing members of the gang.”

In another development, on 8/7/2022, Eagle-Net Patrol team while on stop and search duty along Sapele-Warri Expressway, intercepted an Audi Saloon car with Reg. no. QA 480 UGH, carrying two suspicious looking occupants.

“The team subjected them to a search during which one locally made pistol and two live cartridges were recovered from them. The two suspects, Joshua Stephen ‘m’ age 20yrs and Wisdom Obanor ‘m’ age 21yrs were arrested and investigation is ongoing.”

“On 06/07/2022 at about 1347hrs, operatives attached to Otu-Jeremi Police Station while on stop and search duty, along Owawha/Okwagbe road, sighted a Lexus 350 SUV with reg. no. LG 31 GRA. On noticing the Police, the driver made a U-turn and sped off. This aroused the suspicion of the Policemen who gave them a hot chase.

“At Oghior/ Imode road, in Ughelli South LGA, the hoodlums abandoned the vehicle and escaped into the bush. When the vehicle was searched, one pump action gun, two locally made guns and six rounds of live cartridges were recovered. Investigation later revealed that the SUV was earlier snatched from the owner along Ughelli-Warri Road. Manhunt for the fleeing suspect is ongoing.”