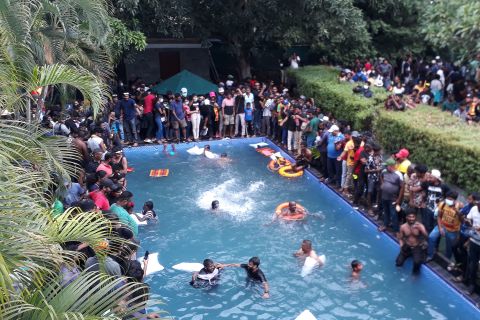 Thousands of protestors in Sri Lanka have broken into the president’s official residence in the capital Colombo as growing public anger over the country’s economic collapse comes to a head.

The pre-planned rally broke into the residence as anger over the worsening economy boiled over.

Police and military personnel at the scene were unable to hold back the crowds, who broke through the gates chanting their demand for President Gotabaya Rajapaksa to step down.

The seafront residence and secretariat had already been the site of sit-in protests for months.

Footage circulating on social media shows protestors jumping into the swimming pool in the residence, while a Facebook Live showed people moving into the building in real time.

It was gathered that the protesters also set the presidential palace ablaze.