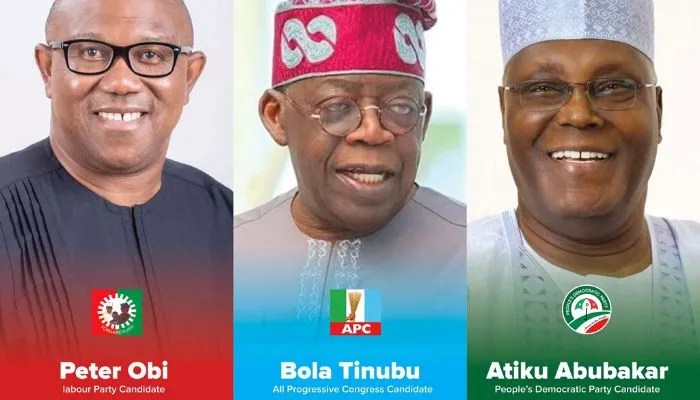 All is now set for the 2023 presidential election with the emergence of Kashim Shettima as the running mate of Bola Tinubu, the All Progressives Congress, APC, presidential candidate.

Tinubu officially announced Shettima, a former Governor of Borno State as his running mate on Sunday.

It was observed that Shettima’s emergence negates the call by many political stakeholders in the country, who are agitating for a Northern Christian presidential running mate.

Rather than bend to the call, Tinubu opted for a Muslim-Muslim ticket.

While Tinubu opted for a Muslim-Muslim ticket, other presidential candidates like Atiku Abubakar of the Peoples Democratic Party, PDP, and Peter Obi of the Labour Party, LP, settled for what could be termed a balanced ticket.

Deji Adeyanju, an Abuja-based socio-political commentator, spoke on how these running mates would make or mar the chances of their respective candidates.

Adeyanju said: “From a religious point of view, Shettima is a strong pick, though he has a lot of issues hanging on his neck like that of Chibok. Many believed he staged the Chibok issue; he has Boko Haram questions hanging around his neck; he once said if he speaks about Boko Haram, the country would explode. He is yet to speak even when many of us have begged him to speak.

“However, looking at voting patterns in the country, it’s a given that he is going to deliver Borno. Because of such considerations, I think he strengthens Tinubu’s ticket because he has a lot of friends in the North who are politicians. Politics is about reaching out and negotiating with people, and he has it.”

Pointing out Shettima’s weakness, he said: “Ideally, if this was a country where people’s perception is taken to the polling units, Shettima would mar Tinubu’s presidential bid due to his several remarks in the past. The audio of him and Amosun is online, where he was completely condemning the Igbos and saying derogatory things against them. We can’t have such a person as a Vice President, but such things don’t matter; anybody can be president. Look at the kind of thing Buhari said before he became president; he was against delisting Boko Haram as a terrorist group and spoke about the Islamization of Nigeria, but he became president. We have not elevated political conversations to that level where things like that will make or mar candidates, and it’s unfortunate that we are not yet there.”

Like Shettima, Adeyanju said Okowa “will deliver Delta State to Atiku because that is where he comes from and the South-south has that sympathy for the ticket. I believe he would make the ticket progressive in that region of the country.”

He said: “Because of the friction in PDP over the running mate issue, and to a larger extent, the party is still unable to get their acts together after the primaries, as a fall out of the VP pick, this may work against Atiku in the Southern part.”

The rights activist said Baba-Ahmed is a good pick for Obi’s ticket.

He, however, said the accomplished academic lacks the political sagacity to help Obi win the 2023 presidential election.

“He is a fantastic intellectual and is somebody who will make a good minister of education considering what he has done in his private practice and personal life.

“However, he is not a good pick for Vice President because, politically speaking, he comes from a State where he can’t deliver his local government to Peter Obi. Obi is not a strong candidate in the race; as an underdog coming on the platform of an unknown party without structure, they needed to do a strong pick like Kwankwaso, who has a State like Kano. That was why I was disappointed when they couldn’t reach a consensus. Politically speaking, I don’t see the ticket as being strong; the Datti Baba-Ahmed ticket is a weak one in my view,” he said.

“Datti Baba-Ahmed is a weak candidate, he is not bringing much to the table,” he added.

On its part, the Christian Association of Nigeria, CAN, alleged discrimination against Christians.

Pastor Adebayo Oladeji, Media Assistant to the CAN President, Rev Dr Samson Ayokunle, said the APC’s Muslim-Muslim ticket was a slap on Christians in the country.

Speaking , Oladeji lamented that APC’s choice of a Muslim-Muslim ticket was an indication that Christians are incompetent to be Vice President.

He hinted that Christians may vote against APC during the presidential election.

Oladeji said: “We are being discriminated against, it’s a slap and a slight on us; telling us that there is no competent person among the Christians for the role of the VP.

“In the Northern States, we have former Head of States, former Ministers, former governors, those who have held key posts in this country and have never failed. We have SGF, serving and former.

“And they are telling us that we are not competent with all these calibre of people? This is our concern. We need a leader that will promote peace and unity in our country.