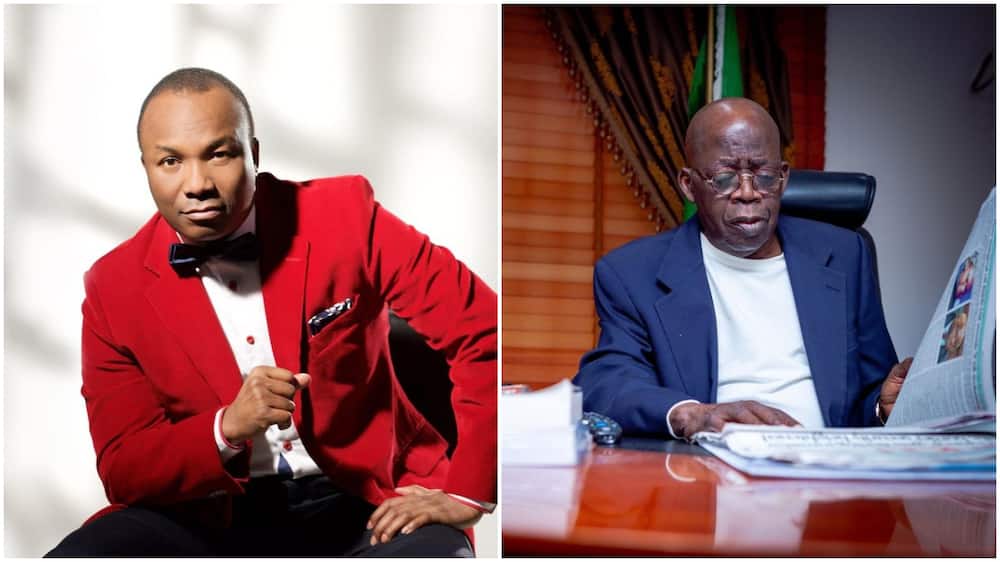 The founding pastor of the Embassy of the Blessed Kingdom of God for All Nations, Ukraine, Sunday Adelaja, has thrown his weight behind the presidential candidate of the All Progressive Congress, Bola Tinubu.

He is one of the leading Nigerian pastor that has openly endorsed a presidential candidate for the 2023 General elections.

Adelaja, who backed the candidacy of President Muhammadu Buhari in 2015, stated via his official Facebook page on Monday, that irrespective of how divisive tribal sentiments are in Nigeria, Tinubu has played his card better than his opponents and is more visionary than others.

He claimed that Tinubu’s choice of Kashim Shettina (a Muslim runningmate) will give him votes in the Northeast while Buhari and some northern governors will consolidate his victory in the northwest.

He added that the people in the South-west do not vote based on religion and that the region remains Tinubu stronghold.

According to him, even though the South south and South east will go the way of the Labour party and the Peoples Democratic Party, the number of votes will not outsmart what Tinubu would secure.

He wrote: “Tinubu is a man of vision. Can you imagine that when he was voted in as Lagos Governor he set up a think tank through which he was able to develop a 50 year vision for Lagos. No wonder Lagos is still under the leadership of his disciples till today long after Tinubu himself stopped being the governor. The reason is simple, the whole world will follow the man that knows where he is going.

“If those three geopolitical regions go the way of Tinubu/Shettima, all other political parties would only be contesting for the second and third positions. So what of a Muslim/Muslim ticket? Yes, that will really be a big issue for some Christians from the south/south and especially south/east areas of Nigeria. These are regions that don’t normally vote APC anyway, they cannot be the main factors for consideration, expediency advises that you mainly consider the opinions of your staunch supporters, those who’ll give their vote to you.

“ The South/south and the Southeast will vote either PDP or Labour Party, even if Tinubu selects a Christian running mate. The Southwest doesn’t really care as much when it comes to religion, it’s the most tolerant zone in Nigeria in that term, so they’ll surely remain with Tinubu no matter what. The other two zones that will vote Tinubu/Shettima ticket are Northern states, they’ll rather be excited by that choice.”

Adelaja maintained that he personally don’t believe that Tinubu who is married to a Christian Pastor for 40 years will all of a sudden try to Islamize Nigeria.

“If that could be the case we would have seen the signs in Lagos. No, we need not fear Muslim/Muslim ticket, no, not under Tinubu. At this juncture I can only say; Nigeria, behold your next President, Bola Ahmed Tinubu,” he added.

Other reasons why he is backing Tinubu are that he is a raiser of men, and was able to survive as the Governor of Lagos, when the normal monthly federal government allocations to the local government administrations of the state was stopped by the then president.

“Many accuse Tinubu of corruption,that I cannot affirm unless the court of law finds him guilty of any crime. If the Obasanjo government that hated him with passion couldn’t convict him of corruption then I’ll not join those spreading that rumors.

“Remember that the most respected anticorruption advocate in Nigeria till date is Nuhu Ribadu, yet this same person said he couldn’t implicate him of any crimes even though Obasanjo gave him the task to investigate him.

“More so, Ribadu himself later joined the team of Tinubu calling him his mentor now. The US government came out to say Tinubu is cleared of any criminal dealings. It was published in the Vanguard of 23 February 2003.

“Ever since Tinubu left government in Lagos, it’s one of the few states of the federation that has not been plagued by corruption scandals. Tinubu has been able to put capable technocrats in charge of the state. From Fashola to Ambode to Sanwo-Olu, these are extremely focused men EFCC has not been after them as it’s the story with other governors, neither has there been any international anti corruption agency that have accused them of corruption.

“I’ll say until we see the facts, we should just focus on someone that’s capable of resolving the daunting issues facing our nation at this time. Tinubu has to be allowed to contribute his quota to turn this nation around.”