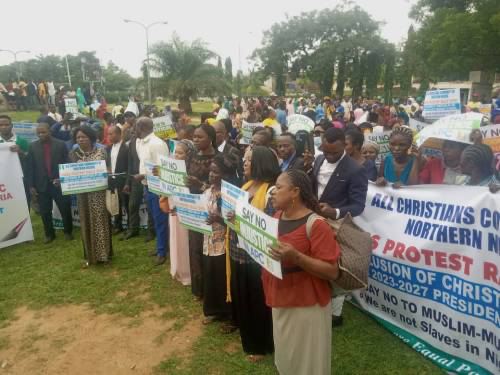 Over 10, 000 Nigerians from across the 19 northern States, on Friday, converged in Abuja, to protest the Muslim-Muslim ticket adopted by Chief Bola Ahmed Tinubu, the Presidential candidate of the All Progressives Congress (APC).

The protesters, under the aegis of All Christians Community of Northern Nigeria, marched to the Presidential Villa to submit a protest letter to the Federal Government over the Muslim-Muslim ticket adopted by the APC.

Leader of the group, Moses Adams said these are indeed not the best times for Christians in the APC and Nigeria in general.

He said the sensibilities of Christians have been “insulted by the ambition of a select few that have elected to throw caution to the wind.”

He noted that Nigeria is a multi-ethnic and multi-religious State, with Islam and Christianity as the two major religions which have defined the country’s way of life since independence, adding that successive governments have respected the country’s multi-religious nature, especially during elections, to create a balance in the leadership of the nation.

Mr. Adams said the decision of the All Progressives Congress (APC) to disregard the Christian community in the choice of its vice presidential candidate for the 2023 presidential election was, therefore, “unacceptable and a recipe for creating sharp divides between the Muslims and the Christians in the country.”

He pointed out that since the return to democracy in 1999 in Nigeria, the tradition has been a Muslim-Christian or Christian-Muslim pairing by all political parties, which had to a large extent, ensured religious harmony in the country.

While describing the APC Muslim-Muslim ticket as the “height of discrimination against Christians”, he mentioned that other political parties reflected religious balance in the composition of their presidential team.

The Christian group wondered why the APC elected to toe this path of dishonour that, in its considered opinion, “is deliberate to relegate the Christians in Nigeria into oblivion, which is not in the best interest of the country in this critical period of our existence.”

It said Northern Christians were displeased and angered by APC’s insensitivity, which goes to show that Christians are not relevant in the scheme of things in the country.

The group stressed that the move by the APC was intended to cause a crisis of unimaginable proportion along ethno-religious lines.

It appealed to the President to intervene in reversing the “ignoble move” by the party’s Presidential Candidate.

“We demand that you invite the Presidential candidate of the party to quickly retrace his steps immediately,” the group stressed.