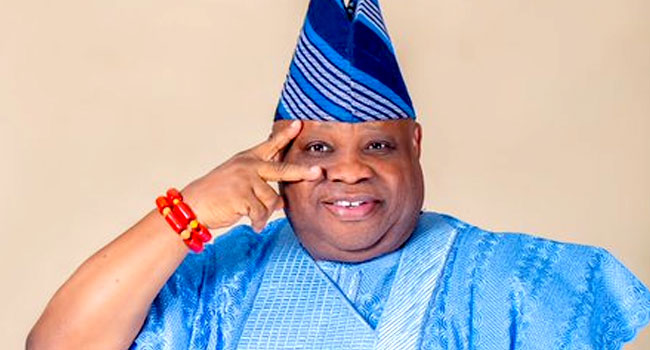 Profile of Ademola Adeleke
Early life
Adeleke was born on March 6, 1960, to the family of Ayoola Adeleke and Esther in Enugu, South East geopolitical zone of Nigeria.

Academic qualifications
Until June 2019, he served as a senator for Nigeria’s Osun-west senatorial district. His family hails from Ede in Ede Local Government Area.

He enrolled at Atlanta Metropolitan State College, where he earned a Bachelor of Science in criminal justice in 2021.

Working experience
Ademola Adeleke is a successful businessman and administrator who served as Pacific Holdings Limited’s group executive director from 2001 to 2016.

Pacific Holdings Limited was his brother’s company as at then. From 1985 to 1988, Ademola worked as a service contractor for Quicksilver Courier Company in Atlanta, Georgia, the United States.

From 1990 to 1994, he served as vice president of Origin International LLC, a flavour and fragrance manufacturing company in Atlanta, Georgia, US.

Personal life
Ademola Adeleke is an affable man and is fondly called the Dancing Senator, following his dramatic victory dance when he was declared the winner of the Osun West Senatorial District by-election.

Adeleke is an uncle to popular pop artiste, Davido and the father of another popular singer B-red.

His hobbies include dancing and singing; he even claims to have taught his son and his nephew, Davido, how to sing.

Adeleke’s political career
Until the death of his elder brother, Isiaka Adeleke, the head of Adeleke’s empire, who died on April 23, 2017, Ademola was relatively unknown in politics before then.

Osun West Senatorial District and other party powerful men agreed to return the ticket to Adeleke’s empire, as such; Demola stepped in to fill Isiaka’s vacancy in the Senate since it is required to do so by the constitution.

It was a shock win in the by-election for Adeleke. Nine of the ten local governments in the senatorial district elected him, and he received 97,280 votes in total. He dedicated his victory to his late brother.

On September 22, 2018, Adeleke ran for governorship of Osun State as a member of the People’s Democratic Party (PDP) against APC’s Gboyega Oyetola and Iyiola Omisore, candidate of the Social Democratic Party (SDP)

The Independent National Electoral Commission (INEC) ruled the election inconclusive and scheduled a rerun for September 27, 2018. Oyetola, a candidate for the APC, won the run-off election.

Adeleke called the election a “coup” and opposed the outcome. On March 22, 2019, a Tribunal proclaimed Adeleke, winner of the election.