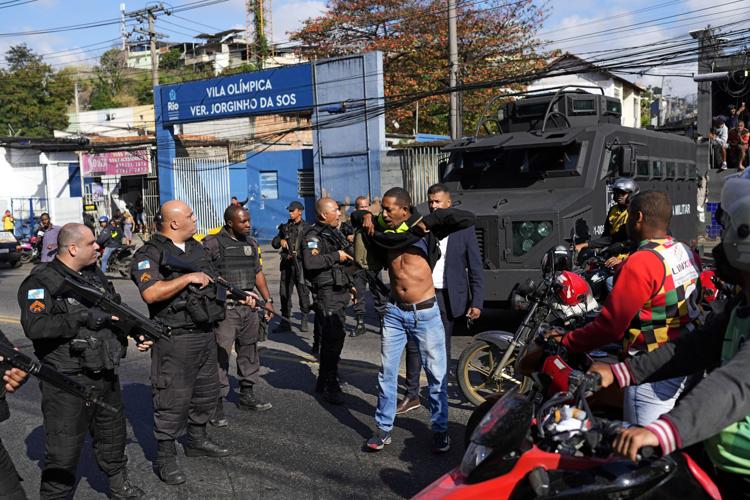 At least 18 people have been killed in a horror massacre at a Brazilian favela after 400 armed police raided the slum which is home to an organised crime group.

A local woman, an officer and 16 gang members were among the dead in Complexo do Alemao after the hours-long shootout which saw police helicopters trading fire with the targets after a dawn raid.

Officers were backed up by ten bulletproof vehicles and four helicopters as they tried to crack down on the criminal group that had robbed vehicles carrying cargo for banks and other businesses.

Videos circulating on social media showed intense shootouts between criminals as well as a police helicopter flying low over the small, brick houses, and barricades set on fire to prevent the passage of security forces.

Residents waved white towels and sheets in a signal to surrender but the slaughter continued, with locals carrying the bodies of the dead wrapped in blankets through the impoverished streets.

At the site of the raid, residents carried about 10 bodies as bystanders shouted, ‘We want peace!’

‘It’s a massacre inside, which police are calling an operation,’ one woman told AP, speaking on the condition of anonymity because she feared reprisals from authorities. ‘They’re not letting us help (victims),’ she added, saying she saw one man arrested for attempting to do so.

Law enforcement authorities defended their officers’ conduct during the operation, saying that units had been ‘violently attacked’ with ‘military and guerrilla’ tactics, while accusing the alleged gang members of using civilians as human shields.

Ronaldo Oliveira, an investigator with Rio’s police force, said officials would have rather just made arrests of suspects ‘but unfortunately they chose to fire at our policemen.’