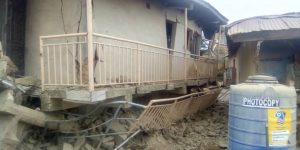 The Ancient Town of Ilesa witnessed noise pollution in the early hours of Saturday as a man identified as Sunday escaped death when a three stories building collapsed in Ijofi area of Ilesa, Osun state.

Mr. Sunday was said to be urinating beside the three stories building when he heard some strange noises from the collapsed building before he ran for his dear life.

The collapsed building which was situated in ijofi, along the road leading to the Wesley Guild Hospital in ilesa, where it was said to have been under construction for more than five years before it was given a touch of finish this year.

Speaking in Ilesa, Mr.sunday, he said: ” I was urinating here beside this story building when I hear some noise emanating from the building and I left its premises immediately.

“It came as a shock to me to witness this kind of incident where a completed building will just sunk and collapsed at every edge without even falling to affect other buildings around it.

“I give thank to God for his mercy and for saving my life from this ugly incident”,he added.

The edifice said to have been constructed as shopping complex for rent where only waiting for the painters to have some touches of paints and colours.

Every effort to contact the engineer in charge of the building as at the time of filing this report was proofed abortive, as his phone number was not reachable.