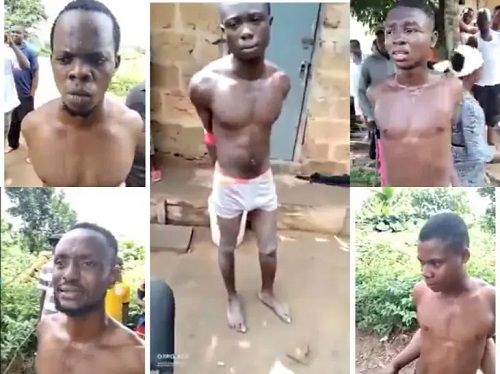 The boys have been caught several times and given lashes of the cane in the past before their recent arrest.

Luck has finally ran out on five young armed robbers terrorizing villagers in Ugwuakuma, Arochukwu Local Government Area of Abia State.
According to reports, the five armed robbers were caught and paraded by the villagers for engaging in robbery.

An eyewitness and a resident of Aro, who pleaded anonymity, revealed that boys are villagers from Ugwuakuma and Agbawu, adding that the boys have been caught several times, given lashes of cane at the community hall counselled and set free after a week or 2. But now the villagers and the security operatives have had enough of them.

In a video which was obtained by LatestNGnews.com, a voice was heard behind the camera, doing a brief introduction about the criminals. The first suspect was Alfred, he was caught red handed while stealing chairs in the Ugwuakuma community health center.

The Second suspect was their crew leader, whom was referred to as commander. He was the first that started using guns to operate. The community vigilante went to his house for searching and they found gun in his procession. They believed and suspected to he’s getting the guns from a politician, as they’re currently investigating more to find who their sponsor(s) is/are. He also stole solar battery and equipment from the health center.

The third suspect is a son of a man from Agbawu. He’s been arrested several times but has now graduated and become a hardened criminal that uses gun.

The fourth suspect is the youngest of the crew, according to voice in the background, he’s from Agbawu but his people has rejected him, because he has almost vandalized all the shops in Agbawu. They disowned him and he migrated to Ugwuakuma, adding that he’ll steal from Ugwuakuma and run to Agbawu to sell, and vice-versa.

During the course of interrogation, some of the stolen items were recovered in the house of the fifth suspect, who according to the voice in background, didn’t deny the allegations after he was caught.