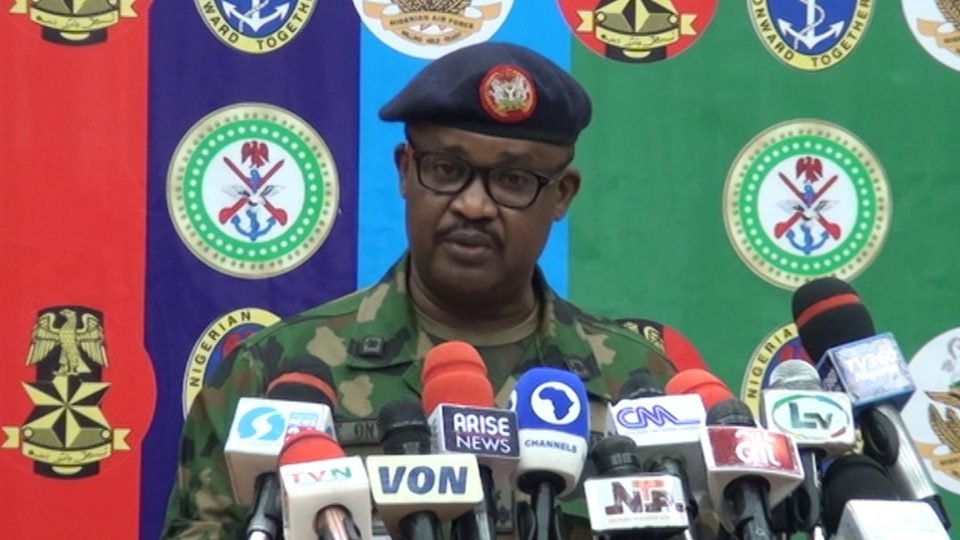 The Defence Headquarters, on Thursday, in Abuja said military troops have eliminated 30 terrorists who attacked troops of the Guards Brigade in the Bwari area of the Federal Capital Territory (FCT) on Sunday.

It was recalls that military personnel were attacked while returning from the Nigerian Law School, where they had gone to discuss security issues with the management of the school.

Two senior officers were ambushed and killed in the process

However, the Director, Defence Media Operations, Maj.-Gen. Bernard Onyeuko, during a Bi-Weekly news conference on military operations on Thursday in Abuja, said the operation was conducted by troops of 7 Guards Battalion and 167 Special Forces Battalion in conjunction with the air component of “Operation Whirl Punch” between Sunday and Tuesday.

According to him, the troops successfully cleared Kawu and Ido villages, neutralising the terrorists and destroying their enclave and hideout.

He said the ground troops also recovered six motorcycles, two AK47 rifles and one fully loaded LMG magazine amongst others, during mop-up.

He said the hierarchy of the Armed Forces of Nigeria and other security agencies re-assured Nigerians of its commitment and pact with all Nigerians, adding that with the recent operations carried out from July 23, 2022, “we wish to assure residents of FCT in particular that we are undaunted and unrelenting in our efforts to ensure the safety of lives and properties.

He urged people to go about their normal business as their safety is guaranteed, just as he requested the support and cooperation of all Nigerians.

He also encouraged citizens to report unusual persons in their communities to security agencies. If you see something, say something.

On his part, the Director of Defence Information, Maj-Gen Jimmy Akpor, urged the media to continue to support the military in ensuring that the enemies of the nation were defeated.