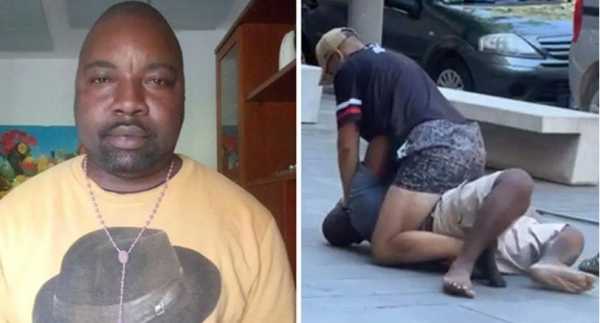 The incident happened on Friday in Civitanova Marche city, located in the Province of Macerata, Marche Region of Italy.

The Nigerian Embassy in Rome, Italy, has weighed into the murder of a Nigerian man in the country.

The embassy narrated how a 39-year-old Nigerian, Alika Ogorchukwu, was been beaten to death by an Italian man in Civitanova Marche city area of the country.

The incident happened on Friday in Civitanova Marche city, located in the Province of Macerata, Marche Region of Italy.

The Nigerians in Diaspora Commission and the Nigerian Embassy confirmed the development.

Explaining what transpired, the embassy in a statement described the incident as a ‘brutal murder’, adding that all hands would be on deck to ensure justice prevail in the matter.

The statement read, “The attention of the Embassy has been drawn to the brutal murder of Alika Ogorchukwu. A 39-year-old Nigerian citizen who was beaten to death by an Italian man on Friday 29th July 2022, in Civitanova Marche city, located in the Province of Macerata, Marche Region of Italy.

“The incident occurred on a busy street, in front of shocked onlookers. Some of whom made videos of the attack, with little or no attempt to prevent it.

“His Excellency, Ambassador Mfawa Omini Abam has condemned the gruesome murder and has commiserated with Mrs. Charity Oriachi, wife of the deceased, and the rest of his family.

“His Excellency has directed the provision of immediate consular assistance as appropriate. The Embassy is currently collaborating with relevant Italian authorities to ensure justice is served and to provide succour to the family of the deceased.

“Ambassador Abam wishes to enjoin members of the Nigerian community in Italy to remain calm and to refrain from taking laws into their hands.

“His Excellency wishes to reassure Nigerians in Italy that citizen diplomacy remained the key thrust of his administration and will leave no stone unturned in ensuring that all Nigerians in Italy receive timely, efficient, and professional consular services.”

Also, confirming the development in a tweet on Saturday, NIDCOM wrote, “39-year-old Nigerian citizen was beaten to death by an Italian man on Friday 29th July 2022, in Civitanova Marche city, located in the Province of Macerata, Marche Region of Italy.”

The PUNCH had on July 27, 2022, reported that two Nigerian men were shot dead by gunmen at the ATL Lounge in Vaughan, Ontario, Canada.

The identities of the two Nigerian men were revealed as Chibueze Momah (22), and Tosin Awaroshegbe (25), according to Adam Abdul, who claims to be a cousin to one of them.

Abdul wrote, “Eze and Tosin were both diligent workers who served as security guards for many lounges in Vaughan. They were loved and cherished by many in the community.

“Their story was only getting started as they had both recently graduated. Eze was set to make his way into the tech industry and Tosin our beloved engineer.

“Unfortunately, their time was cut short. It is our hope to raise $50,000 for each respective family to help with funeral costs and to reunite their bodies with their families.”