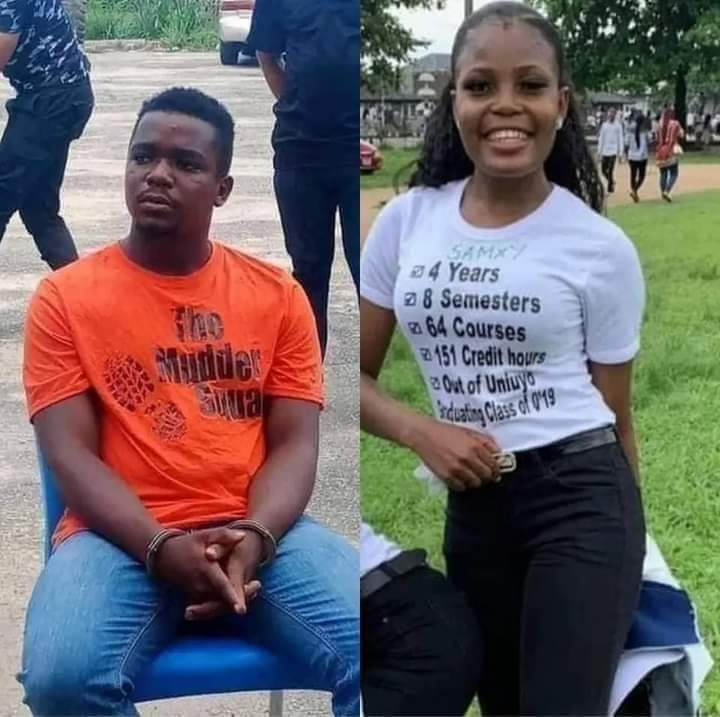 The Akwa Ibom State High court in Uyo on Thursday sentenced Uduak Frank Akpan, the first accused in the murder of Iniubong Umoren, a job seeker in the state to death by hanging.

In the over two hours of judgement by the presiding Judge, Bassey Nkanang, the convict was found guilty of murder and is to be hung by the neck till he dies.

He was also found guilty of rape and is to be committed to life imprisonment.

Recall that Uduak Akpan stood trial for over nine months for luring Iniubong Umoren to his residence in the pretence of offering her a job but raped, killed and buried her in a shallow grave in his father’s compound.

Delivering his judgement, Justice Nkanang, discharged and acquitted the 2nd and 3rd defendants who were Uduak’s father, Frank Akpan and sister, Anwan Bassey respectively accused of accessory after the fact to murder.

He said, ” this court has proved beyond reasonable doubts that you, Uduak Akpan is guilty of murder and you are charged accordingly. You are to die by hanging until you rot away”

Meanwhile, shortly after the pronouncement, there was a temporary pandemonium in court as the convict was said to have come out of the dock and grabbed a lawyer by the next in an attempt to choke him before security agencies grabbed and beat him mercilessly before whisking him away.

Speaking after the judgement, the State Attorney general and Commissioner for Justice, Uko Udom, SAN, expressed satisfaction over the ruling on the matter

“I thank the presiding judge over the way and manner this matter has been conducted. The judge was able to take a day out, tried the case on a day-to-day basis and at the end of the day, we had a judgement that the justice system works. We are very happy about the outcome of the case

Speaking on the next line of action, the commissioner said “as you can see, the first defendant has been led into custody and the 2nd and 3rd defendant have been discharged and acquitted, we intend as a state to analyze that judgement and see if there are any grouse and take a decision but the judge has done a good job.

Commenting on the attempted escape of the convict, the Justice commissioner said he was not surprised at his behaviour

“It’s not something to be surprised about, someone that committed such gruesome offences and I’m not surprised for him to do something as bad as he did here but the security officials were very alert and attentive that was why they stopped him

” I won’t fail to commend the officers of the Nigeria police force and the DSS for their diligence in the prosecution of the matter, they did great jobs in the investigation though sometimes the public especially on social media accuse them of complicity they have done well,” he said.

Reacting to the judgement, counsel to Uduak Akpan, Samson Adula said a lot of people were interested in justice in the matter, adding that justice had been served.

“All we are interested in is justice, and justice has been done, the person that was supposed to be convicted has been convicted, and the other two defendants were discharged and acquitted, that is the justice of the case. The work of defence counsel is to ensure the rules were followed and not to defend at all cost” he said.

Elder brother to the deceased, Mr. Ephraim Umoren expressed satisfaction in the judgement and commended Governor Udom Emmanuel and his wife, Martha Emmanuel for their support to the family

However, the deceased’s elder sister, Ifiok Umoren, while hailing the judgement called on both the state and federal governments to provide employment for the teeming youths to address unemployment in the country.