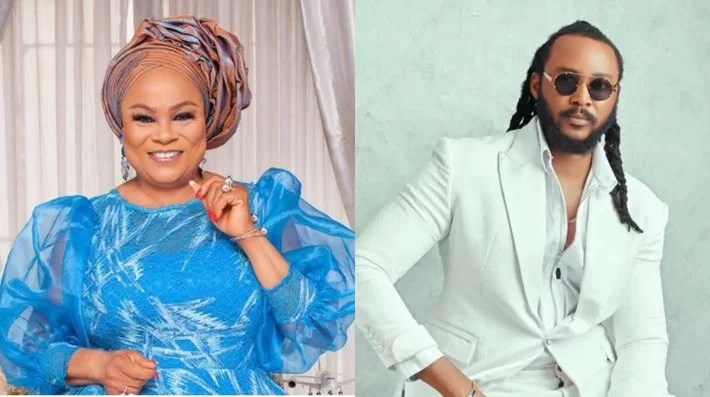 The duo of Nollywood thespians, Sola Sobowale and Titi Kuti, aka Ade Tiger, have have opened up about the dating rumour trailing them.

The two stars sparked a dating rumour over their seeming strong bond on movie sets.

The hearsays intensified after they both featured in ‘King of Boys: The Return of the King’.

In an interview with Chude Jideonwo, the two denied the tale.

Ade Tiger said he is very much aware of the tongues wagging that he is Sobowale’s boyfriend.

“We go for parties together, we go for Owambes together, we have heard all sorts, you see what you guys saw on KOB, people have been saying all those things before KOB, that that’s her boyfriend.

“Trust me because we will go for parties together, we rep each other all the way, like no holds barred.

“Olusolami Adufe is a bosom friend”, he added.

On her part, Sobowale said Tiger’s humble personality and etiquette endeared him to her.

The actress also said that “I love him so much.”

The actress disclosed that the pair’s relationship is beyond acting now because she sees him a son.

“It’s more than acting now because I see him as my son and I love him so much. There’s something about Titi Kuti, he’s a good listener, very very respectful and has a lot of etiquette. Well brought up!.

“When you see a chap like this, you’ll see that he is down to earth, very very humble. So when I saw him, I said, omo you got to move, don’t stay behind there.

“I told him something, that he has to be a pilot, he has to go do that and I’m pushing him on it, I won’t let him stay, he’s still moving. On the move, we move. Ade Tiger, yeah yeah till I die!”, she stated.