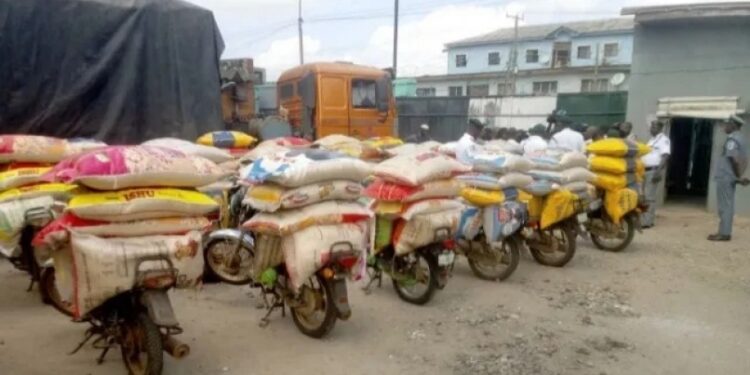 Nine smugglers have been arrested by the Nigeria Customs Service (NCS), Federal Operations Unit, Zone A in Lagos in connection with 201 seizure of cartons of expired seasoning (chicken cubes and some contraband valued at N537.5million.

The anti-smuggling unit’s Acting Controller, Deputy Comptroller, Kehinde Ejibunu listed some of the seizures to include: 7,261 bags of 50kilogrammes of foreign parboiled rice (equivalent to 12 trucks loads); I600 bags of basmati rice (5kg each); I34,725 litres of petroleum motor spirit (PMS); 39 bales of used clothes; 225 pieces of used tyres; 331 cartons of frozen poultry; 6 units of used imported cars; 2,634 cartons of slippers/shoes; 900 pairs of used shoes and 42 units of used motorcycles among others.

He noted that poultry products remain a prohibited item under the import list, because of its attendant health and economic implications, saying that the Federal Government in its wisdom had banned the importation of poultry products so as to support the growth of the country’s domestic poultry farms, and to protect them from foreign competition.