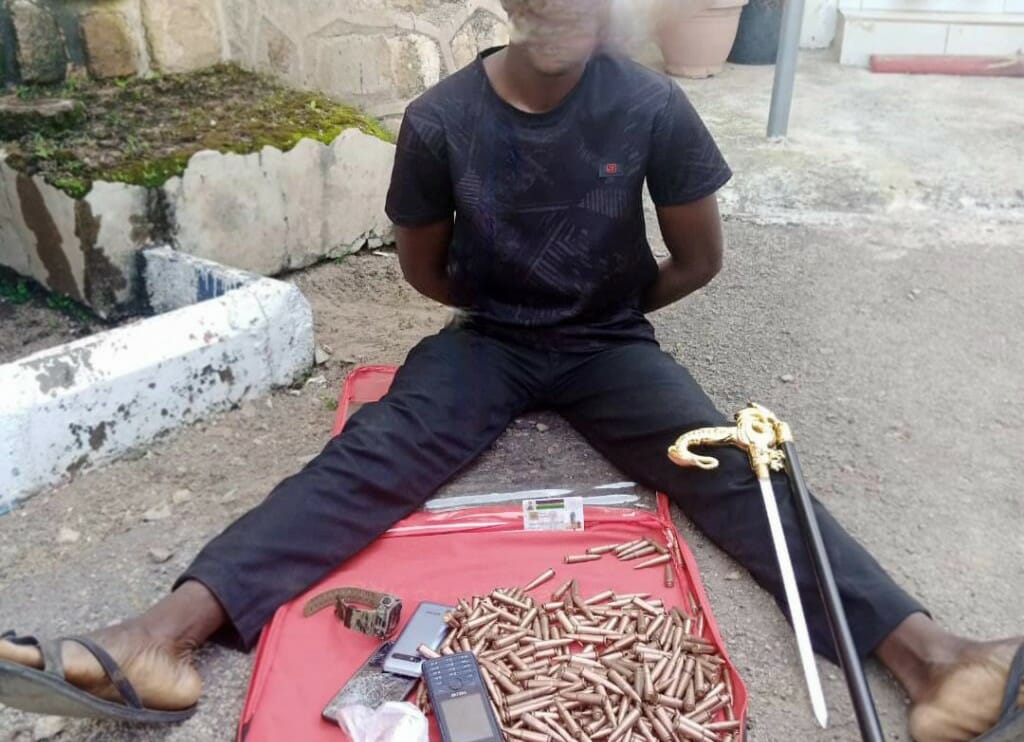 A self-confessed leader of the Black Axe confraternity, otherwise called Aiye, Saheed Taiwo, has narrated how they treat rival cultists, any time there was a clash in Ogun State.

27-year-old Taiwo said his group did not only kill rivals but they also cut off their hands and used them to prepare protection charms.

According to Vanguard, the Taiwo said severed hands were also used to prepare concoction for his members against arrest by the Police.

But the potency of the charm became questionable as he was arrested alongside two other hit men in his confraternity, by operatives of the Inspector General of Police Intelligence Response Team ,IRT ,headed by DCP Olatuniji Disu ,in the Abeokuta area of Ogun State.

Those arrested with Taiwo were : Isaiah Babatunde and Oyede Sulaimon. They were alleged to have killed members of rival cult groups within Ita Oshin and neighboring communities in Ogun.

It was gathered that during the operation that led to the arrest of the trio, another notorious member of the group identified simply as Ben, disappeared with one of the gang’s AK 47 rifles.

Taiwo confessed to have joined the Aiye cult group in 2018, as a senior Secondary School 1 student, of Anglican High School, Ibara, Abeokuta. He however dropped out of school in 2019. Between the period he joined and when he was arrested, he said he had lost count of the number of rival cult members his group had killed.

He said,“ As an individual, I cannot tell you I have killed anyone. This is because we usually operate as a group. We have killed many people. I have lost count of the number. Anytime we were going for an operation, our leader would instruct us to ensure we kill as many as we could.

“We don’t just kill. We cut off their hands. The severed hands were taken to a set of twins in the Ago Oka area of Isale Ogun, in Abeokuta. I met the tradition of delivering severed hands to the twins . They are used for rituals, especially to prepare concoction that would protect us from being killed by rituals and being arrested by the Police.”

Asked why the charm did not work for him and his colleagues, he cast a blank stare apparently wondering why, too.

He mentioned names of rival cult members his group had killed and the circumstances under which the operation was carried out.

Taiwo said: “Members of my group are responsible for several killings in Ogun State. A particular case was the killing of a leader of a rival cult group in the Ita Oluwo area of Abeokuta ,some months ago . He was called Tommy. But I was not among those that went for the operation. Ben ,Dare, Killer ,Idris and Aloma did and they went with a Pump Action Rifle.

“They went on motorbikes . They said they first matcheted Tommy before shooting him, to ensure he was dead. He was one of the leaders of the Eiye group. All the cult killings were reprisal attacks.

“There was another reprisal attack on the Eiye group. Eiye cult group killed a member of our group during the clash and our leaders, Dare and others, mandated us to go and see what was happening there .When we got there ,we identified one of them .

Later we traced the identified Eiye member, who was one of those who killed our, to Lafenwa and killed him.

“We also cut off one of his hands with our axe. We don’t call it axe in our group. We call it ‘ seven’ We took the hands to the twins for the usual thing.”

Continuing, Taiwo stated that “We have assorted arms and ammunitions .There is hardly any arm you cannot find with our group be they single or double barrel guns, or AK 47 and many more.

“I was using a double barrel gun for operation. One of us, Rasqie , escaped with it on the day we were arrested.”

The Force Public Relations Officer, CSP Muyiwa Adejobi , assured that other fleeing members of the cult groups would be arrested and prosecuted, adding that Taiwo and his colleagues would be charged to court.